Slow down, be confident, remember your status…

Years ago I was standing with all my peers in a big old fashioned school type hall with tables down the side. We were cued up for ages waiting to be handed our uniform and books, pencils and pens and things. At the end of the line they had this stack of instruction manuals. The thing is by the time they got to me they’d run out of the English one’s and they thought, he looks bright and clever we’ll give him this Japanese one.

The thing is I don’t speak Japanese…

Today, was my second trip to London and I arrived at Bill’s house in Clapham Junction, SW11 in time for a coffee and to recap over last week’s extensive phone conversation over my profile, and a review of the last session and what, if anything, has changed…

Detailing my experiences last week at being plunged into meeting and greeting Richard (my replacement), and demoing my current job role to Louise, it seems that a fair bit has ‘stuck’ in my mind. I’ve been practicing open questions, and listening, and from that basis selecting what I talk about and how I might or might not form a rapport/what kind of relationship I might have with someone. The mind-mapping exercise too, as made me aware of drifting in conversation and enabled to me to pull myself back on track.

I did however, here, reveal my inability to really talk intelligently with others about what I had learnt, and this led on to being told aout the five stages of learning…

Most of the time I’m existing at Stage 4 which makes it hard to describe what I’m learning because I’m just doing it, and to step back down to Stage 2 is hard work but that’s where you have to go if one is to learn and to be taught new skills. Stage 1 is like not being able to ride a bike or speak a language, but not knowing that are bikes are for riding or languages are to be spoken. By contrast, Stage 2 is wanting to ride a bike or to learn a language, but not knowing how to ride/speak the bike/language.

Drawing on the Action Plan from the profile report then, I identified three areas to concentrate on. These were Communicating (Listening), Developing People, and Delegating – with the two major points being the first two. Then came a time of brainstorming and pulling out bits from the profile to fill a flip chart page, and thus to fit beneath these headings. In time for a late coffee break, I managed to end up with the following… 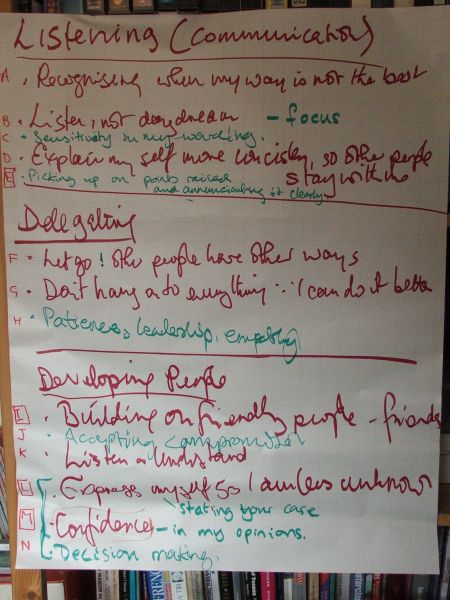 Following this, faced with the question of which three points I thought to be the most important, I took a rare moment of assertiveness and labled them sequentially with letters of the alphabet. At this point, Bill didn’t have an idea what I was doing, but I confidently asked him choose a pen, and then gave him a piece of paper, giving us both both instructions to write down the three most important for me. I came up with I, L and M, and Bill with E, L, and M (I agreed straight away that E should have been on my list!). With this in mind, the rest of the session was given over to instruction and practice into what I can do improve these areas, and in doing so to better manage stress, and to manage conflict, to trust more, and to be less defensive, and to come up with strategies and choices for when things don’t go right (to have a Plan B).

Over the next three weeks then, I have practice and pay attention to, in myself and others:

All in all, a very productive day. I feel positive, and I feel that I am getting somewhere…