Julian, in a bored moment on the web (or so he says) found this and sent it to me tonight. It seems that shepline.com has now become a source for illustrating news stories (observe the photo in the news stories and then see, here in my photo galleries)… 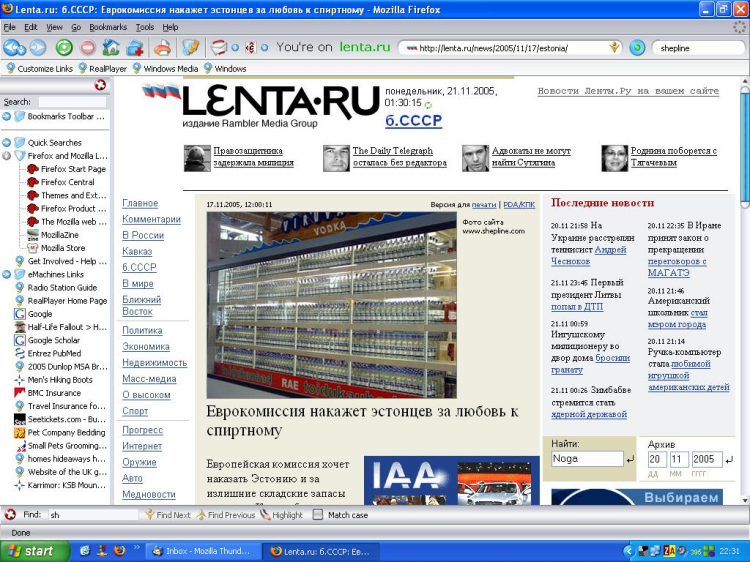 Using the various translation tools out there, we can see that the news story behind this site (exhibit A) is thus:

Euro-commission will punish Estonians for the love for the alcoholic the European Commission he wants to punish Estonia, also, for the superfluous warehouse reserves of alcohol. As it reports to Thursday DELFI with the reference to the Estonian publication Eesti Ekspress, according to the estimation of European experts, at the moment of the connection of Baltic republic to THE EUROPEAN UNION on the storages of Estonia there were 1350 tons of the surpluses of alcohol. Penalty for the alcoholic beverages can reach to 10-19 Euro- for every one hundred liters. It is thus far accurately unknown, how much what alcoholic beverages are included in list, but supposedly the sum of penalty can be from three to four million crowns. Estonian officials and producers of alcohol with this posing of the question are not agreeable. Executive director of one of the most important producers of alcohol in the republic of the enterprise “liviko” Of yanek Of kalvi is sincerely astonished by the possibility of penalty and considers conversations about the warehouse reserves of alcohol laughable, since, in comparison with the sugar, this is “pseudo-problem”. Let us recall that THE EUROPEAN UNION already put in Estonia the penalty in 700 million crowns for the surpluses of sugar. According to unconfirmed data, to this can be added new penalty in the size of 328 million crowns for several ten designations of food goods. References on the theme – Estonia will part with its own currency in yr – Lenta.ru, 01.09.2005 – SE was perturbed marginalizatsiyey of Russians in Estonia – Lenta.ru, 15.08.2005 – Estonia is not assembled to change constitution for the Euro- – Lenta.ru, 01.08.2005 – THE EUROPEAN UNION fine Estonia for the surpluses of mandarins and alcohol – Lenta.ru, 05.07.2005

Well, at least they’ve credited me correctly! It also explains where some of those Russian hits on my website comes from… *giggles*