So the HS2 high-speed rail link gets the green light, and I find myself more confused than ever with my feelings about this. 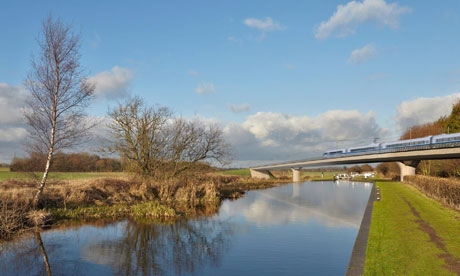 I am very much in favour of high speed railway, not that we need many lines in the UK. We have the one that comes in through the Channel Tunnel to London. Naturally we need one to go north from London to Birmingham, Manchester, Glasgow and Edinburgh… and maybe one down into the southwest to Cornwall, but we are small island. We only need high speed rail where there are people doing those routes at the moment by aeroplane.

I have been against the current HS2 plans principally because Phase 1 only goes as far as Birmingham, with Phase 2 following that to Manchester and only Phase 3 getting as far as Edinburgh! We don’t need to get to just Birmingham so quickly. There rational has been that its needed to relieve over-crowding on the standard rail traffic, but surely that could be done by running more, longer trains, and invested in the current network (as they have been). In Bicester they’ve ripped up the through lines so all trains that stop hold up the lines, but if the through lines were reinstated it would allow fast trains to pass stopping services.

I’ve been of the opinion that, yes it would be hugely more costly, but it would be better to as Phase 1 go for a line that goes all the way from London to Edinburgh so we can hit the climate polluting short haul flights where it hurts. When you think of how much more productive you can be on a standard rail trip to Edinburgh (7 or 8 hours? of time at a wi-fi connected seat with table if the trains were designed right, that has got to be more productive than an hour from home to local centre, a bus to the airport, check-in, flight, arrivals, taxi to destination… another 7 hours of broken segments…), and with a high speed rail you could still get the almost door-to-door a bit quicker …. there wouldn’t be a need for any UK domestic flights (with the exception of getting to some of the islands).

This said, it does look like the most sensitive parts of the Chilterns are now safe with the line going through a deep bore tunnel, and the line seems to be going a more direct, less destructive route so maybe they have listened. I’m still not convinced that the government are doing it for the right reasons though.