Just after 10 o’clock this morning the revised edition of The End Of All Worlds plopped through the letterbox in its shiny new all colour cover. I still find it hard to believe that it was less than 24 hours since I approved the digital proof and ordered a copy. Less than 24 hours and you can order a copy, have it printed, and dispatched and arrive through the letterbox? Ain’t technology great?

Changing the cover has been a controversial decision, with many of my friends actually preferring my own illustrated former version of the novel, even if they admit that the all-colour new edition will sell more on bookshelves. Oddly though, the version is closer to my original vision of what I wanted the cover to be like. The black and white illustration was my interpretation of a photo that I could in no way afford to use. The new one uses someone else’s illustration which I can afford the licensing on montaged with my own photograph, and I think represents the way that the burden of the war between the worlds falls on one girl who stumbles, literally, into the responsibility.

There has been much said of late as regards the way that Amazon has been slowly killing off high street stores and independents, and I do a feel a bit guilty about getting so completely in bed with Amazon with the eBook and POD publication of my novel. That said, the reason why the paperback has the admittedly high price of £10.99 is because I opened out the distribution as widely as possible to allow local bookshops to order it.

So today I did something that have never done before, and have been petrified of doing so. During our Saturday morning trip into Bicester I ventured into Cole’s Books to ask if they would be interested in stocking the book of a local author. I was half-expecting that on a Saturday there wouldn’t be the right person to talk to, but no, they were interested so long as they can get it on sale or return, but they scanned the barcode and it came up on their book distributor so I think that might be hopeful. Hey, I might even be able to do a book signing. Now that would be an experience…

Following my bravery, and the purchase of much healthy fruit and veg, Emma decided on the spur of the moment to take me for a celebratory lunch at Amici’s Italian Restaurant in Bicester. Whilst we were choosing from the scrummy menu we had the most torrential of downpours and the waiter was jokingly offering fresh, locally caught fish from the street outside! 🙂 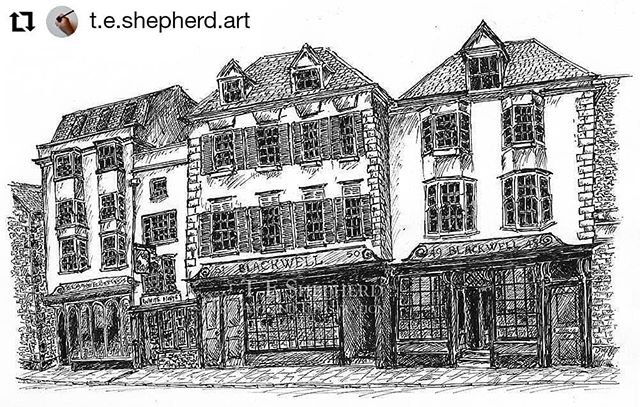 instagram
#Repost @t.e.shepherd.art • • • • • • Blackwell’s Bookshop Selling as part of #artistsupportpledge created by @matthewburrowstudio. Each #illustration will be £200 or below (not including postage and framing if required) and every time I reach £1000 I promise to buy another artists piece for £200. DM me if you are interested. Thanks! • • • Two years ago I began a project to create an illustrated #BookloversGuideToBookshops, and @blackwelloxford has to be the biggest bookshop of the lot. • • • Blackwell’s Bookshop Oxford Pen & Ink 10×6” £200 • • • #artistsupportpledge #supportartists #penandink #bookshops #indiebookselleres #bookshops #artistsoninstagram #illustratorsofinstagram #contemporaryartist #support #artist #lockdown #lockdown2020