With not too much imagination, a story of how we could all be living soon 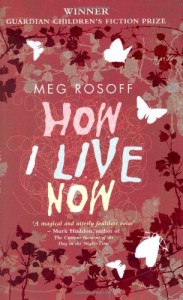 How I Live Now by Meg Rosoff

This book has been on my TBR shelf for too long, and I really don’t know why. It’s not a long book but even so I don’t often race through a book like I devoured this one… and it’s not just because it’s an easy read because the subject matter for hit hard.

Set immediately after, and during, the onset of war it is reminiscent of some of those war-time stories set during WW2 with children being evacuated to the country, but this is a story set clearly in the here and now with mobile phones and email. We never find out what happened but I’m guessing it was some kind of 911 or 7/7 attack… some of the repercussions could be read as what will happen to our world in the future when the power runs out…

It’s written in the first person with sparse use of punctuation and a very deliberate (and hugely effective) if odd use of capitalisation which connects you totally with Daisy’s world.