Through the eyes of a writer

To round off my Easter weekend Emma and I went for a walk down by the canal in the Spring sunshine. Whilst we were putting out boots on, a car drew up and parked with a cat lounging in the sun on the parcel shelf. A man waiting in  car got out and went to retrieve the cat. First off he succeeded in letting the cat escape and  to pursue him across the country road but managed to catch him again and took him to his car. As we went off on walk we assumed they were swapping the cat over for some reason…

After we got back from our walk, whilst the man’s car was gone, the woman’s was still there: clearly they must have met there and gone off somewhere else together with cat.

Now, this is where my brain seems to differ from  norm. Whilst Emma looks at it as a sweet take of boyfriend and girlfriend meeting up but no it having anyone to look after the cat. What I see is two people having an affair, and the stories that the cat could tell. Further to this I see a novel, told through the eyes of the cat of two people and their illicit relationship….

Originally published at shepline: the journal. You can comment here or there. 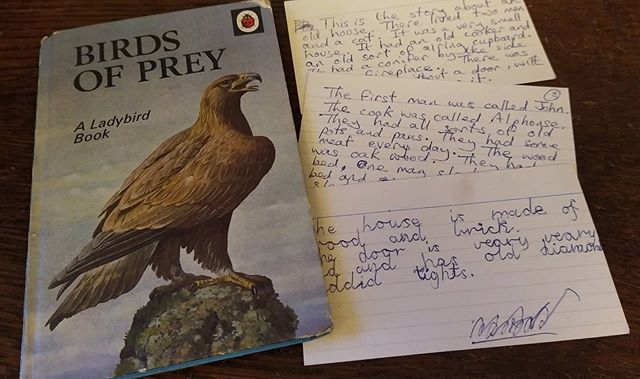 instagram
Rediscovered today, tucked inside the @ladybirdbooks Birds of Prey, possibly my first ever story, written c. aged 6. . This is the story of John and Alfonse and the first two cards were dictated by me to my Dad, and the third was written by me with suspect phonetic spelling… . #earlyworks #stories #authorsofinstagram