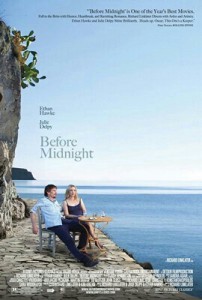 In the summer of 1995 I fell in love with a film.   Before Sunset was the film; a story of two people, Celine and  Jesse, who met on train crossing Europe, talk, get off at Vienna, walk around the city, talk some more, and say goodbye. Before Sunset was the sequel that picked up the story nine years later… they met again in Paris, talked some more and possibly, maybe got together.

Another nine years and a ‘conclusion’ to the  trilogy sees Celine and Jesse at the end of a holiday in Greece with their young family.  I have been looking forward to this movie and fearing it in equal measure. Will this film soil my two favourite films of all times…?

I needn’t have feared. It was brilliant.  Not so much the love story of the earlier two films but then the love story was never really the point of these films, but the  plot device that got two characters talking. I’ve come away from seeing this film hoping that a book of the film, if the screenplay is available (as they have with the earlier films) as the film is just so damn quotable – I lost count of the number of times that I thought I must remember that line but then another would come along and scream remember me at me.

I’ve grown up with these films. I am, within a couple of years the same age as Celine and Jesse, and of their actors Ethan Hawke and Julie Delpy, and their revisiting of their story matches my own life.

It seems that my two favourite films have become three.

journal
Everybody needs some stripey badgers

reviews
A Cosy Mystery by a ‘Reluctant Murderer’