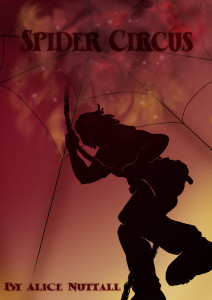 Alice Nuttall is a PhD student at the university where I work, and it was a colleague of mine who pointed me in the direction of her debut novel, Spider Circus. I am really glad that I was because I found her book gripping and thrilling from the beginning – you can read my review here. After chatting about her book over email and Twitter, I’m really excited that Alice has agreed to do an interview with me about it, her writing, and her influences.

TS: First off Alice, thank you for agreeing to this interview. Let’s start at the beginning, shall we (always a good place I find). You’re at a party and you have to describe your book to a stranger. What would you tell them?

AN: Spider Circus started as a long series of ‘what ifs’. What if a circus didn’t just travel between towns, but between different worlds? What if a girl who’d lived an ordinary, boring life in an ordinary, boring village ran away and joined that circus? What kinds of things would she see? What dangers would she face? Spider Circus grew out of those thoughts, as well as some ideas that I’d already been working on. Out of all those different thoughts, I got the story of Lizzie, a girl who joins a circus that turns out to be even more magical than she’d expected.

TS: I loved the idea of *jumping* between different world’s and the circus that also moved between them. For me it reminded me so much of Diana Wynne Jones at her creative best. How do you feel about that comparison?

AN: I’m a huge fan of Diana Wynne Jones’ work, so being compared to her is a real compliment -her novels, especially the Chrestomanci series, have been such an inspiration to me.. In fact, I was a little worried that my work might be a little *too* like hers – I only read Homeward Bounders for the first time after I’d completed an early draft of Spider Circus, and I was scared people were going to think I was plagiarising! However, I realised that there are so many stories which explore the idea of parallel worlds (His Dark Materials, the Narnia books, the TV series Sliders, to name but a few) – I just had to make sure that my dimensionals’ journeys took them to different places than their predecessors.

TS: I really know what you mean about not wanting to be thought of as plagiarising. I’m writing a book that use Tam Lin and Thomas the Rhymer as a base and is inspired by Jones’ Fire & Hemlock but it is a different story. You’ve said that all your stories will be set in the same multi-verse – I like that! Did you want to elaborate on that? I assume the stories might be completely separate but with links…

AN: Basically, I want the best of both worlds – to be able to tell very different stories, but with a few subtle connections between them that people might pick up on. One of the less subtle connections is the village of Middlewick, where Lizzie lives; it’s also the location of my short stories, Free Gifts and Daisy’s Demons. I’ve got a few more stories that I’m planning to set there, and am currently working on another that reveals why strange things tend to happen in that particular village.

Characters are another connection; there are so many characters that I want to write about in greater depth. The sequel to Spider Circus will focus on Damien, and the third novel in the series will be about someone who’s currently a very minor character (although Lizzie’s still going to have a major role – she worked her way into the heart of this story, and she isn’t going anywhere any time soon!) I also really want to write a Doctor Scott story, I have a feeling it’d be a lot of fun.

TS: This all sounds like a lot of fun! And yes, I approve of having lots of inter-vaguely-conncted stories. Which brings me on to my next question… Just where do you get your ideas from, and how long do they sit in your head for brewing? What’s your weirdest idea for a story?

AN: I’m not always sure where I get my ideas from. Most of them just seem to filter in from the world around me – things I do, people I speak to, books I read, they’re all potential sources. Sometimes I get an idea and write the story immediately, in near-finished form -this happened with Free Gifts and Daisy’s Demons. Most of the time, though, the ideas sort of have to percolate in my head. I’ve had various ideas for the Shadows series kicking around since I was fourteen years old, and all that time of writing and rewriting hasn’t just helped me improve my style; it’s helped me sort out which of the ideas are worth hanging onto, which need changing, and which really, really needed to go.

As for the weirdest idea I’ve had… I’m kicking around the idea for a short story about a secret cloning project in Oxford, because I’ve noticed that so many of my friends from out of town seem to have Oxford doppelgangers. But I need to do a bit more scientific research before I can write that one.

TS: Interesting! I wonder what it is about Oxford as a place that makes so many writers create these alternate versions of it…? Lots of writers also create playlists for their novels now. Firstly, do you do this, and if so what might we find on the playlist for Spider Circus? Also, how does music inspire/effect your writing in general?

AN: I don’t make specific playlists, but there are various songs/bands I listen to when I’m writing. For action scenes, I listen to lots of melodramatic orchestral metal, like Nightwish. For serious/emotionally angsty scenes, I often listen to Dresden Dolls or various songs from musicals (my current favourite is “Let It Go” from Frozen). I have a pretty strange taste in music, my MP3 has everything from Disney songs and TV themes to metal and classical.

TS: Eclecticism is good in my book. An insight into the *real* Alice now. What little nugget would you like to reveal about yourself that your readers might not know. What makes Alice really tick?

AN: Ooh, that’s a tricky one… I’m a bit of an introvert (which is SHOCKING in a writer, I know), but, just to be contrary, my favourite hobby – other than writing – is going out and lindy-dancing with loads of people until the small hours of the morning. I’m very fond of debating things (not in the public, competitive sense, but in the “this is a really important social justice issue!” sense). And I like sitting in corners and loathe sitting with my back to a crowded room, which is probably a bit weird.

TS: I thought all a writer’s writing was the inner-extrovert of the introvert? And why would you want to sit with your back to a crowded room? Getting near the end now, and you’ve mentioned on Twitter previously that you and your uncle have been trolling each other for your entire life and that it his fault that I got kicked out of a wedding when you were two. What’s the story behind that?

AN: Hah, this is the story of my earliest memory. My uncle has always been a massive joker, and he particularly likes convincing people of silly things (for example, he once convinced my grandma that there were serious plans to lay the Millennium Eye down flat so people could use it as a roundabout). When I was two and about to go to this wedding, he told me that at weddings, people always shouted “SPEECH!” – but he didn’t tell me at what time (which I think was deliberate).

So, the wedding was underway, the bride had walked down the aisle, the vicar was about to start talking -and suddenly, two-year-old me starts yelling “SPEECH! SPEECH! SPEEEEEEEECH!” at the top of her voice. My grandma had to carry me out of the church because I simply would not stop.

TS: Great story! I hope you got your own back on your uncle… *grins* Not only content with writing your novels you’re also studying for a PhD aren’t you. How does the one effect the other?

AN: I study children’s literature and postcolonial literature – it both does and doesn’t affect my writing. I’m really interested in the representations of non-white characters in children’s literature, and read a lot of work by authors like Joseph Bruchac, Cynthia Leitich Smith, Malorie Blackman, bell hooks and others. That said, though, I didn’t sit down and think “I’m going to write a fantasy story with a black heroine!” – Lizzie just appeared in my head as she is in the book. I very rarely make decisions about my characters, they’re too strong-willed for that.

TS: I love it when characters tell *Me* what the story is! This has been a really interesting interview, and I hope you’ve enjoyed answering the questions as much as I have asking them. What one last thing would you say to someone who was thinking of reading Spider Circus (and they should)?

AN: Ooh, that’s a tough one…my stories are so much part of me that I always feel like anyone who reads them has had a brief wander around inside my head. So, I hope they find it an interesting and worthwhile journey!

After an argument with her mother, Lizzie McCoy runs away and joins a circus – but instead of travelling to different towns, she soon finds that this particular circus moves between worlds. In her new role as wiredancer, Lizzie sees magic, dragons and predatory horses, and finds that the Ringmaster Jack is running more than just a show…

Alice Nuttall is a tea-swilling, lindy-hopping, perpetual student who lives in an attic in Oxford. She has been writing since she could hold a pen, and currently divides her time between working on her novel, finishing her thesis, and unjamming photocopiers.