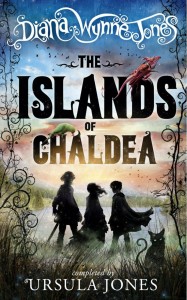 The Islands of Chaldea by Diana Wynne Jones, Ursula Jones

The appearance of this book has been an unexpected pleasure for any Diana Wynne Jones fan, being the book that she was working on when she died, and for that you can forgive it if it is not the greatest Diana Wynne Jones story. Completed by Diana’s sister Ursula Jones, she admits in the afterword that at some point Diana’s story stopped dead with no notes…

I am pleased to say that you cannot tell where that join is, although in retrospect I do have an idea of where that might be. I’m not going to divulge my theories though as I wouldn’t want to affect any reading of the story.

There are elements of Charmed Life the story with Aileen discovering who she is, in a classic quest story that sees her travelling through the islands of Chaldea and meeting the guardians of the islands and representatives of each. And like the magic in the story, its all bound together in classic Diana Wynne Jones-style, and wit.