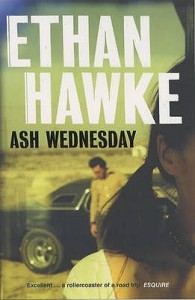 This is a fantastic, thoughtful, and insightful read about some not so likeable characters. That is not to say that it is impossible to like Jimmy, Chrissy, or their love story of a road trip as they cross America – just that you can see all to well how easy it would be for either of them to find reasons to dislike the other. In that I guess its all too much life. Which is why, although I wouldn’t want to be Jimmy, its also a really good read.This is Ethan Hawke’s second novel. More commonly known as an actor who found fame in Dead Poets Society and his role in Richard Linklater’s Before Sunrise and it’s two sequels, which he also co-wrote – it is this last fact which is why I came to read Ash Wednesday.

In the Before Sunrise films, Hawke plays Jesse, a writer, and I felt greatly that this book could easily have been one of Jesse’s books with the way that he observes quite candidly the every day life of ordinary people. I’ll definitely be seeking out his first novel to read and any more that he comes out with.