A dark tale, set in the dark, dark woods 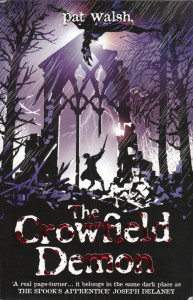 The Crowfield Demon by Pat Walsh

This is the second in the Crowfield trilogy by Pat Walsh – a series of books that pitches religious beliefs with beliefs of magic and the fae world. Our hero is Will an orphan who finds himself under the guardianship of the monks of Crowfield Abbey, but his real, true companions are Shadlok – a fay trapped in this world and bound to Will for as long as he lives – and ‘the hob’whom we both met in the first book of the series.

It’s a dark tale, taking place in the woods (don’t all fairy tales take place in woods…) and the crumbling abbey, threatened by some dark magic. When the church collapses and monks die it is largely because they haven’t listened to Will when he talks of dark magic, as they prefer to have blinded faith in their God who does nothing to help them at their hour of need.

The language of the book is immediate and now, but in its tone succeeds in reflecting the darkness and senses of the medieval world.