Alphabetical: the story of the ox-house 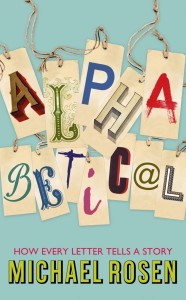 Alphabetical: How Every Letter Tells a Story  by Michael Rosen

I have enjoyed dipping in an out of this book a chapter – or should I say a letter – at a time since Christmas. The history of, and the stories behind, words, letters, and languages are fascinating and this book is every bit as fascinating.

I never realised that, to take its actual, literal meaning, the alphabet is an ox-house! And there are so many other gems that its hard to single them out. Each chapter concerns the history and story of one letter, and then Michael goes on to use the letter to tell some other story about how language has evolved. He goes back to the earliest cyphers and rune markings right up through letterpress and mass publication to the 21st century texts and tweets of the digital age.

Next time you send a tweet, stop for a moment, and think of it as a telegram of old.