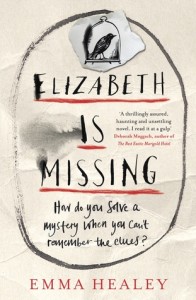 Elizabeth Is Missing by Emma Healey

This is a quite remarkable story from a debut novelist to watch in the future. Emma Healey’s story is told by Maude – an old lady living with the onset of dementia – as such does not always (brilliantly) make sense.

She spends the course of the novel searching for ‘Elizabeth’, her friend, but finds it hard to make herself understood. Indeed it is in the scenes when she is trying to make herself understood that I find are the best. The smaller scenes, the scenes where she encounters people on the street, in shops, or at the police station, are incredibly powerful. They are about a woman with a dementia, but they could so easily refer to, and reflect, how society does not understand people with any of the hidden conditions.

There are poignant and touching moments, but there are also really quite funny episodes, like when Maude is placing a small ad in the local newspaper for her friend, and the woman in the office thinks it is a lost cat.

The fact that this story comes from the pen of an author who’s still so young, makes it even more impressive, and her next novel, which I hope she is already writing, even more anticipated.