A brilliant satire of both fairytales and Hollywood 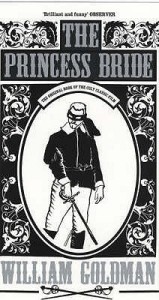 The Princess Bride by William Goldman

Ever since I first saw The Princess Bride film I have loved it – loved it as much as a dear old friend. How come then that I have only just discovered that there is a book of the film (or should that be a film of the book?) to read. The is a modern fairytale. More than a fairytale, it is a pastiche of what fairytales are. The book goes beyond that for it is a satire not just of fairytales, but of how old stories are, are written, and of Hollywood that mines them for its films.

In the film, a grandfather reads the book to his grandson, skipping out the boring bits to the tale of high adventure that he thinks the boy will enjoy. In the book, we see this as an autobiography of either (and both) Goldman being read the book by his father and he reading the book to is son.

For a while you do actually believe that Morgenstern’s Princess Bride is a real book, and you think about trying to track it down in some secondhand bookshop somewhere. It’s a clever idea that makes you believe its an actual abridgement in which Goldman presents the ‘good parts’ version of an older story through tales of how he adapted it.

Where the book follows either the fairytale or the grandfather/grandson scenes of the film the book every bit as good, and the introduction is very entertaining. As the book progresses, I do feel that Golding gets a bit carried away with his notes on the text, none more obviously than in the concluding section that follows the main story where he satarises the Hollywood obsession with sequels. The ‘Buttercup’s Baby section doesn’t really seem to add anything much to an otherwise brilliant book.