From the very first page of Mr Tumnal, you know that music is very important to Lewis/Louis and to his lives. How important you will have to wait to fully discover. With such importance you might expect me to know from the very beginning what piece of music has been haunting his head his whole life. But there’s the thing, I never knew, not exactly. It could be played on a flute I knew that, but that didn’t mean it had to be flute music. What I did know is that it had to be infectious and haunting. I went through the whole book writing and editing with only that knowledge in my head and it worked.

That though, is not the weird thing that I have to tell you. On the very night that I finished revising what was to be the final draft before sending it off to the editor, I was literally just finishing off the last bit the book, and my wife Emma was in the kitchen doing the washing up (I cooked the dinner just so you know), and she thought she heard an oboe or a clarinet playing and came through to see what I was doing. I had no music on; just my laptop and my novel. Anyway she obsessed over this snatch of music for a bit and then grabbed a free keyboard app on her tablet and tried to play the tune that she heard that evening. I knew straight away, even though Emma had not at tha time read the book, that it was Mr Tumnal’s Theme that I was hearing.

I recorded what Emma played and later attempted at a rough transcription of the main tune. It’s kind of vaguely Swan Lake-ish I think, but its not. What I do find it is haunting and spooky and awesomely unsettling. 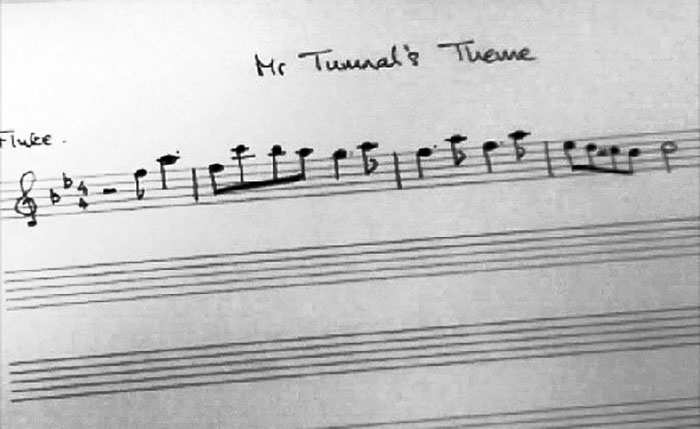 I am luckily enough to have many friends musical than I am, and Neil Brownless, my conductor at the wind band that I go to kindly offered to try and work the original theme up into something bigger. It’s still very much a work-in-progress, but his variation too, is as unsettling as you will find Miss Leroy to be in the book…

Mr Tumnal is published on Thursday 27 November 2014 as for Kindle and Paperback and is available for pre-order now on Amazon UK and Amazon.com (also available on other local territories).