A Saga of Epic Proportions 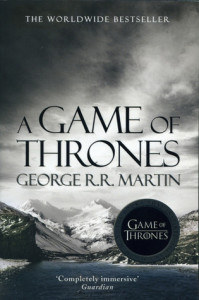 Game of Thrones is a phenonemon that everyone seems to read and/or watched and have been raving about. I actually ended up reading this pretty much concurrently with watching season one of the TV series which might or might not have been a good idea, although I have to say it does seem to be a pretty faithful adaptation.

This is a Big book with a sprawling cast of characters. I was reminded of what Diana Wynne Jones said about maps in her Tough Guide to Fantasyland as I waded through pages and pages of maps at the beginning and wondered how I would keep track of things – short of The Wall in the distant north I’m not sure if I ever really did.

The book is also what I would describe (for want of a better word) as classic ‘sword’n’sorcery’ or high fantasy – the stuff of swords and swordplay, dragons and deception, and battles, whereas ‘my’ kind of fantasy is more your ‘realworld fantasy’ or magical realism. That said I enjoyed the way that the stories (for there are many) are character driven and are told through chapters that are for and about single characters. In this way I felt it was a bit like an Icelandic Saga of old.

My favourite stories were the one’s that involved the young, the in-experienced, or the cast out, who are set to find themselves and learn who it is they must defeat to stay alive. Thus, I found myself most engaged with Bran, Arya, Jon, and Daenerys: all characters to survive until the next book.