When I woke up this morning I really thought that my luck was going to be out when it came to enjoying a second partial solar eclipse with a sky of leaden grey clouds. Emma had made me a box projector though, and I wasn’t going to be defeated, so I went to work, feeling sure that maybe, the greyness was a bit brighter.

On 11 August 1999 I experienced my first solar eclipse. I remember that day perfectly. I was working in the Journals Marketing department at OUP as a temp (yes, I was then still yet to land my first permanent, full-time job), my home computer consisted of an aging black and white laptop running Windows 3.1, and my mobile phone was the size of a brick and made calls, and only calls, in the UK only. The day was bright blue sky and sunshine and we spent half an hour in the office going to the window with our Eclipse glasses and checking the status of the eclipse, before doing a bit more work, then looking again, until…

…everyone decamped outside to the small car park at the back of the building to watch the main event. I remember the birds stopped singing, and the light – it didn’t get dark – went to this weird, washed out, colourless daylight. 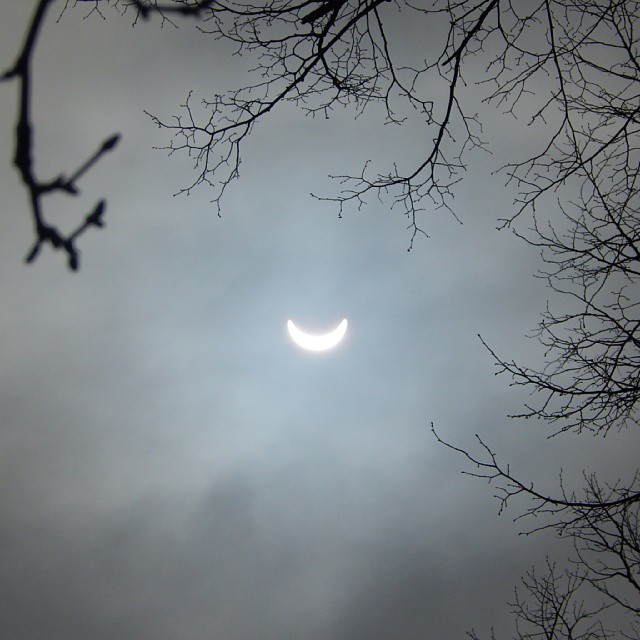 Sixteen year’s on and, I’ve been in full-time work for sixteen years now (with a brief hiatus into temping after I got replaced by a machine), I have constant contact to email, social media is not just a Thing but part of my Job Title, my mobile fits in my pocket, sends and receives texts, goes on the internet, and, if I’m lucky makes telephone calls.

This year, the weather was altogether uncertain. I carried my pinhole projector into work, and upon entering the office, Kirsty was quick to suggest that I was going to be disappointed, that the leaden grey skies were going to remain through and beyond the eclipse time.

Then, a moment of brightness. We looked out the windows, and could see the sun, and the moon already taking a bite out of the sun! We must have been on the border line of sun and cloud and the weather gods played nice for us, as the clouds parted to allow us to view the eclipse. Back in 1999, the path of totality crossed Cornwall and in Oxford we must have had about 95% eclipse. Today, we had only 85% and you could see the difference in light. The day did darken but not, I thought, as much as it did 16 years ago. But the cold, it got so cold – cold as night – but in the middle of the day. Just incredible.

Our next partial eclipse will not be for another 11 years, when totality will miss the UK completely again but we will get 90% coverage as it sweeps down north to south to the west of us on 12 August 2026. Get those Eclipse glasses at the ready…