Coming to Sir Terry too late 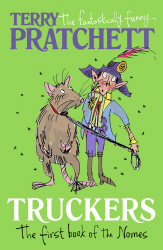 Truckers: The First Book of the Nomes by Terry Pratchett

When Terry Pratchett sadly died last week I felt terrible guilt that I had not fallen in love with his books in the way that so many people (and most of my friends had). I remember his books being recommended to me, in particular his Discworld books, and read the first in the series – The Colour of Magic – accordingly. I remember being distinctly underwhelmed by it to the point that I didn’t read any more.

In the days after Terry Pratchet’s death I discovered that there are several ‘entry’ points to the series, and that The Colour of Magic is not one of the better one’s and that I am not alone in missing out on the books. I went and purchased two books to start me off, this one, and Equal Rites to kick start the Discworld books.

Truckers is a delightful modern fairy tale with echoes of Mary Norton’s The Borrowers and Diana Wynne Jones’ The Power of Three and is set squarely in our here and now real world. But its a different take on our world. It’s our world seen through new eyes, that don’t understand our enviroment and interpret what they see through their own frames of reference. It’s very much the kind of fantasy that I am at home with.