Acquainting myself with the Discworld 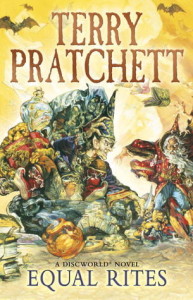 There are apparently different ‘entry’ points to Terry Pratchett’s Discworld books, and in retrospect, I suspect that year’s ago when I read The Colour of Magic – it being the first – was probably the wrong decision.

Equal Rites was much more my kind of book from the start. Not knowing much about the Discworld universe, it was nice to be seeing the story through, and wanting to side with, the character of the Esk, a girl who should have been the eighth son of an eighth son, and thus the next wizard in the family. We learn about Pratchett’s wizarding world as she learns about them, and my relationship with this book is all going very well for at least the first half of the book with nice remisinces of Diana Wynne Jones…

Until they reach the Unseen University, and it takes an altogether weirder – and probably Pratchettesque – turn with an (I found) increasingly annoying omnisicient narrator. There’s nothing wrong with omnisicent narrators but I do like them to be couched in the world of the story too, and not as this one was, talking at us with an all-knowing, Earth-based knowledge.