We had a bit of a quieter day today, heading off to Snape Maltings mid-morning to see an exhibition by the intriguingly-named Jelly Green; a local artist who usually paints livestock but in this exhibiton was showcasing more landscapes. We had a potter round some of the other crafty and antiques shops, and a home furnishings store that makes John Lewis look like cheap tat…

Then we had lunch on the quay before driving north up the coast to my all time favourite childhood haunt of Covehithe. St Andrew’s Church at Covehithe is the tiniest parish church you’ll ever find with the biggest, most out of proportion tower attached – its built in the ruins of an older church. The church never needed to be the size it was, but was built large and grand to show the status and wealth of its benefactor. Now, it sits perilously close to a crumbling cliff edge, and we’re told the latest estimates is that it only has until 2068 before it is swallowed up by the sea along with the manor house and cottages that surround it.

It used to be that you could either park at the church and walk down to Covehithe Broad, or drive on down the road and park up just before a barrier and talk along the cliffs to Benacre Broad. Now there is only one option, to park by the church and walk down through fields of pigs to the beach, and double-back (so long as the tide allows) for a 2 mile walk down the beach to get to Benacre. With a threatening sky, and the fear of less tide time than we thought, we saw sandmartins nesting in the cliffs, a WW2 bunker falling out the cliffs, and driftwood in the making from trees from the woodland above as they slipped onto the beach. 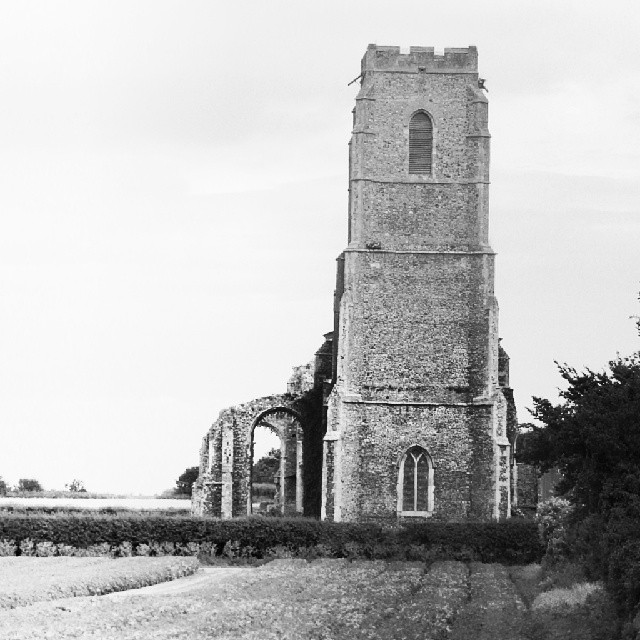 I have also come up with a new idea for a story based on Covehithe church. This one is a dark tale set 60 years from now. It’s not post-apocolyptic but it is a world where there are energy shortages, and electricity is rationed. Not everyone has cars anymore, dual carriageways have become spacious boulevards, and using The Internet is something you can only do at The Library (unless you are very well off), and the church of protagonists childhood is living on the borrowed time on the cliff edge as another storm is coming in from the sea.