A story of damplings and landlubbers 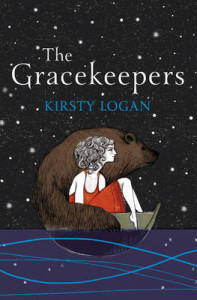 The Gracekeepers by Kirsty Logan

This is a book of big, powerful themes told through lilting, poetic language, but at its heart its a family struggle of thwarted ambition and family heritage. The story is set in a world that, if not our world, is one that could be ours. We never find out what made the world as it is in this story, how it is? But clearly the world was once very different. It’s a world that that could be the result of a dramatic environmental and climate change in the world, one which has seen the oceans rise and archipelagos formed.

In fact there is so much ocean and so little land, that there are now two kinds of people, the Landlubbers and the Damplings, and when people die there is no room for burials, so the dead are taken to the Gracelands – areas of the sea close to the equator maintained by the Gracekeepers – solitary people who look after the burials.

This is the story of the tie between the gracekeeper Callanish, and the dampling North, and it is a hauntingly beautiful book.