A book that we all should read 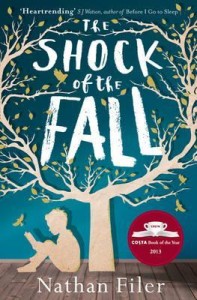 The Shock of the Fall by Nathan Filer

I would like to think that I would have read this book had I known what to expect, but in honesty I’m not sure. It’s not an easy read, by which I mean it grapples with subjects that makes you think, and wish that things weren’t so. In terms of the actual words, its very readable, and is a book that I think everyone should read because it covers a very important, and increasingly relevant subject in these times of benefit cuts, and the tightening of health (and in particular mental-health) budgests.

It’s about a boy/man with schizophrenia and its very much his story, told in his own words and is all the more immediate because of it. Like with Emma Healey’s Elizabeth Is Missing though, it could be a book about just about any of the ‘hidden’ illnesses that there are and makes you really think about what it is like for them in a world that doesn’t really understand them.

“But it happened too fast. My world didn’t move in slow motion.”