The epic is read 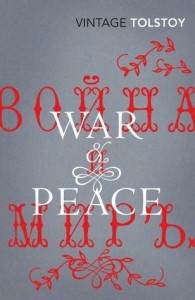 War and Peace is one of those books that I think everyone thinks they ought to read, and probably means to read, but never gets round to it. I’ve had two failed attempts in the past – one was when I picked up one of the £1 ‘Wordsworths Classics’ editions that were all the rage in the early 90s but the paper was like grubby toilet paper and the type miniscule and we just didn’t get on. I had a more successful attempt circa. 1996 when I took on my Grandpa’s big, hardback Library Association copy. I got halfway through it and was enjoying it and I think only stopped because another book was published that I *had* to start reading immediately (it might have been one of Philip Pullman’s His Dark Materials books…)

I have to say that unlike most books, this does benefit alot from having seen a TV adaptation of it recently. It certainly helps to keep track of the plethora of cast in it. The first part is slightly plodding I found, alternating between ‘peace’ scenes that I could follow, and ‘war’ scenes that you just had to get through. But thereafter the pace of the story picks up and carries you though. Occassionally you do find yourself getting a little bit confused but you have to just tether yourself to the Natasha/Pierre storyline and you will be fine.

Towards the end of the book Tolstoy does alternate the ‘story’ with almost essay-like histories of the real events that it is based around. This is particularly evident when you get to the Epilogue. I should say epilogues really, as there two. The first rounds off the Natasha/Pierre story perfectly, but then the second left me wishing I had skipped it. Whereas previously the history elements of the book were there to introduce story and counterbalance it, this second epilogue was almost an appendix in the detail it contained and was there to reflect on the actual events on which the book is based.

War and Peace is a seminal work of all time, and an engaging tale, and I am pleased to have finally read it.