Yesterday I ventured through many equisitely pretty villages (including Eastington, Addsworth, Bibury, Bamsley, and not forgetting the town of Tetbury) to the very other side of The Cotswolds to participate, as an author, in the second annual Hawkesbury Upton Literary Festival. The Hawkesbury Upton Literary Festival is different to the big literary festivals in Hay, Cheltenham, or Oxford. There are no celebrity authors (although there are a smattering of NYTimes and Amazon bestselling authors mingling with the best of us) and no ticket prices. Everyone gives their time for the love of what we do: the book.

I’ve only ever given reading’s twice before, once in an Oxfam Bookshop one evening, and once during Blackwell’s Oxford ‘Books are my Bag’ celebration. A literary festival was an altogether different kind of prospect and one that, as I set out early on a bright, sunny Spring Saturday, I was nervous beyond nervous about doing it.

The festival was declared opened from the steps of the mobile library by festival organiser, Debbie Young and BBC Radio Somerset’s Breakfast Show presenter, Claire Carter…

From the start it was clear that this was a warm and friendly festival by and for people who love books; a festival where traditionally published authors mix seemlessly with Indie Authors their fans and new fans. Beginning in The Fox Inn, I watched the first panel discussion of the day on ‘Writing what you know – or Not!’ partly because I wanted to see how it was go. Then I relaxed in what I shall call ‘the illustration lounge’ where I talked to printmaker Arthur J. Penn, and caught up with some other friends including the Hero for all Indie Authors, the always inspirational (and helpful too!) Joanna Penn.

And then it was time for me to pluck up my courage and head around to the Methodist Chapel for the first contemporary fiction readings, of which I was to contribute. Our chair introduced us each in turn, and when it came to me I read the prologue from my current work in progress, The Imaginary Wife, the sequel to Mr Tumnal. It went well, and seemed to go down well and I was even able to contribute nicely to the audience Q&A that followed. It went so much better than either of my other two readings I’ve given. On St George’s Day, it seems fitting that I have slayed that particular dragon. 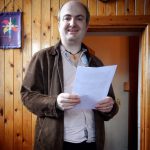 Giving an exclusive reading from Mr Tumnal 2: The Imaginary Wife 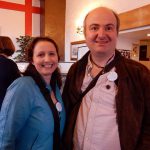 After the reading, I moved with all the other authors and audience to the Methodist Hall which was the Festival Bookshop and Cafe for lunch, and networking. And then, it was back to The Fox Inn to take part in the panel discussion, led by Dr Sarah Brown, a Clinical Psychologist for a charity called Sparkle, on the subject of ‘The Challenge of Writing About Difference’. It definitely proved a popular topic, with a packed out back room in the The Fox (in the after-lunch slot too!) watching a panel of writers affected by or writing about characters with disabilities.

We had on the panel a mother and daughter writing team who have used children’s fiction to campaign for better understanding of people who are different, in a subtle but very effective and memorable way.

I want to tell people what it is like to be disabled and that it is ok to talk to me. I want to help others like me to go for their dream. I have got more confident and I like meeting different people and making people laugh. I tell people to never give up you can do it!

Jess Hiles, co-author of Jess and the Goth Fairy

We also had the author of very successful children’s novel has as its hero a boy with a serious and debilitating skin condition but which doesn’t hold him back, a thriller-writer whose heroine has high-functioning autism, an author with Aspergers writing stories about characters who are different to the norm, a poet who took up writing poetry to deal with her son’s autism, and a performance poet who has written and campaigned about mental health.

What followed was a lively, engaging, upbeat discussion, often personal, about all of the above. The personal nature of the discussion was particularly felt by the audience and I think we all came away having learnt something new from it.

We have a responsibility to all of our readers never to engage in disability tourism, never to use disability as a means to create an angle or just to move on the plot

Dan hits on it brilliantly here, saying so concisely what I might struggle to put into words about how I write about autism. Aspergers is on the mild end of the autism spectrum and and I am on the mild end of Aspergers, and that can bring its own difficulties. Autism is a ‘hidden’ condition, but the affects of it can be all too visible. But for some their ‘meltdowns’ can be themselves completely internal to our heads but it doesn’t mean that they don’t at times go through through the same turmoil of overload. This is then my motivation for wanting people to be more aware of this particular ‘difference’, but I could never do it as an issue-led story. I want to write stories where people of difference inhabit the stories not because of their condition but in spite of it. The story has to come first. 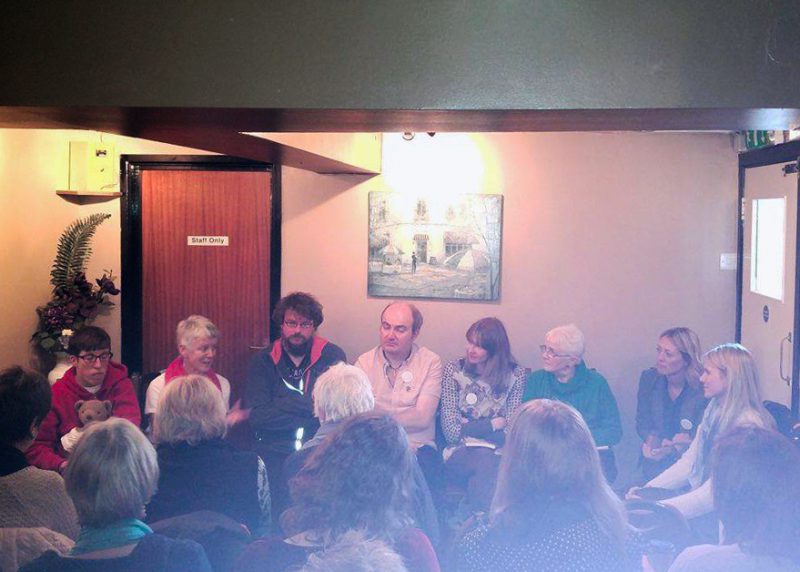 It was a pleasure and privilege to  be on the panel with so many great writers and knowledgeable, thoughtful people – I almost felt like I shouldn’t be there myself. There were some great questions from the audience too which only helped to make it a truly memorable session.

The festival was brought to a close a little after 5 o’clock by Hawkesbury Upton resident Michael MacMahon’s performance of Prospero’s Speech from The Tempest – an appropriate choice for the #Shakespeare400 Deathiversary celebrations.

Were you at Hawkesbury Upton Literary Festival? What were your highlights of the day?