Adventure on the high seas 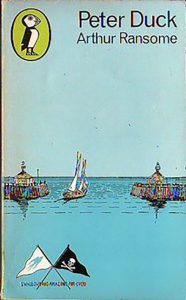 When I originally read the Swallows and Amazons series it was not in chronological order so I am uncertain as to when I read this book. Being a Lowestoft boy (bred not born), I think this book already existed in the family library.

It stands alone from the rest of the cannon because it is truly neither a S&A book and nor a Coots one. It is Peter Duck’s tale, invented by the Swallows and the Amazons during a winter holiday. It is obviously a fictious story, whilst the other invented tale, Missie Lee reads like it is a true story.

I don’t remember much about my first reading of this book except that I was decidedly non-plussed by it. This time round though, I enjoyed it much more, particularly revelling in the descriptions of Lowestoft and the Suffolk coast I know so well. I did still find a jarring disconnect with it, in the speed at which they travelled. The adventurers seemed to reach Crab Island in the Carribean a bit too quickly and easily for a sailing vessel.