George Orwell’s 1984 is just as relevant, possibly more relevant, today as ever it was. It was and is a disturbing book, and Creation Theatre‘s production at Oxford’s Mathematical Institute was always going to be a difficult watch.

It feels odd to say it, but it was bloody fantastic, epic and powerful. It was not an easy watch though. It was both Creation Theatre at it’s best, utilising a unique space in an inventive, effective way, and totally new – normally their shows are fun and fantastic and have you come out feeling good about yourself. 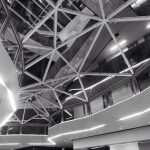 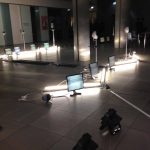 The show began with us corralled us into the bar area beneath a geometrically astounding atrium with the actors heard talking through speakers from where they could be seen on the bridges above. And then we split off in our row orders to be led into the auditorium (in itself a Big Brother-esque act of separation and control). The stage itself was the underground entrance way to the building, in which we watched the action played out in front of us and on computer monitors. The theatre crew were clearly on view working away in the background like they themselves were Big Brother or the Thought Police.

The show featured nudity, scenes of a sexual nature, and simulated torture but it was absolutely in context and very cleverly portrayed. By the end of the play we are left ourselves doubting what is truth and reality. Powerful, emotive drama, absolutely worth putting yourself through if you can get to see it before it closes on Sunday 5 March.

instagram
Incredible way to see our the old year last night. @creationtheatre were at their finest once again for the #SnowQueen. Mr and Mrs Crow stole the show as they helped an incredible Gerda (@annabellemt) in her quest to defeat the evil Queen (@natasharickman – who did manage to make me feel sorry for her at the end). #NewYearsEve #theatre #regionaltheatre #theatreatitsbest

instagram
#NewYearsEve theatre from @creationtheatre is fast becoming a firm, festive, favourite, and this time we took our neice! #theatre #CreationTheatre #SnowQueen