A traditional tale of childhood adventure 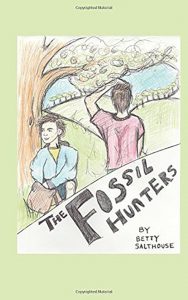 The Fossil Hunters by Betty Salthouse

Who didn’t have a fascination for a fossils and dinosaurs as a child? This is a delightfully traditional tale of childhood adventure. Andy and Darren are two boys who dream of making a big archeological discovery in the woods near where they live.

As it says on the backcover, this is a book that “is set in the days before the internet when children looked for adventure out of doors rather than online”. Anyone remembers the 1980s TV summer holidays programme, Why Don’t You? will know exactly what the author means by this. The downside to this admission, and to little observances throughout the book, is that what could be a beautifully timeless tale is somewhat dated. For the most part this could be a story that happens now, with mobile phones and the internet just shelved as something not needed in the adventure much like Deborah Shepherd does in her book, The Underhill Buttons, but instead Betty Salthouse has decided to set it in I would guess the 1980s. The reference to fax machines jarred for me but then again, for those growing up as children now, maybe the description would be entirely appropriate as it is a technology that has all but vannished as quickly as it arrived.

These are small quibbles though to an otherwise excellently told adventure of children discovering something big. There was a brief glimpse of something fantastical but it was a dream sequence, and there was an all too current reference to something that might have been a climatic threat. A refreshingly traditional children’s tale.