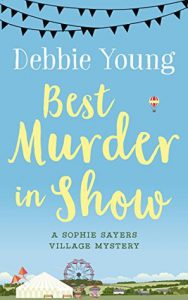 Debbie Young’s debut novel (she is the author already of various anthologies of short stories and non-fiction) is billed as a cosy-mystery – I would suggest the term comic-mystery – there are so many slight, humerous moments to this story that get you smiling.

Perhaps unsurprising for a novel that comes from the pen of an author who is also active in the Alliance of Independent Authors (I half-expected there to be a direct mention at one of the many village meetings!) and who is the founding director of the Hawkesbury Upton Literary Festival, this is a murder mystery that exudes literary and other bookish references. Take the Sophie Sayer’s name for instance. I’m really hoping that Hector Munro might become her Lord Peter Whimsy.

The story begins at the village show, a highpoint in any yearly calendar, and in the shocking discovery of murder in a manner reminiscent of those pre-opening titles moments that anyone who has watched Death in Paridise will be be familiar with. The story winds back two months to Sophie’s arrival in the village to live in the house she has inherited from her aunt (has another murder taken place here too?). If I can leverage any criticism of this mystery is that much as I love reading the excentricities of the Cotswold village life I did at times want to move on to the murder and solving thereof the mystery a little bit quicker.

Sophie though, is a character with her own backstory that is not as simple as you might think (don’t all detectives have a troubled backstory?) and she must grapple with her own insecurities and life as she she stumbles through her own over-active imagination about what the villagers might be like and be capable of before she can solve the mystery at hand. Surely Carol, the gossiping proprieter of the village shop who is every bit a Susan Carter out The Archers, is capable of killing people, or if not has the motivations to do so.

I shall look forward to seeing where Sophie’s next adventure takes us.