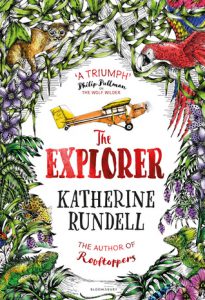 The Explorer by Katherine Rundell

After Rooftoppers any book by Katherine Rundell was going to face a tall order. Where here last book, The Wolf Wilder, delved into the dark and mysterious world of the Russian forest and a history of fairy stories, this, her latest seems to take us back to the territory of her debut novel, The Girl Savage. For this reason whilst I was both in equal excited to read The Explorer I was also nervous for it. I read Rooftoppers first and The Girl Savage didn’t have quite that energy and imagination. The Explorer, on the face of it, seemed like it might be a return to that. I was wrong…

This is an adventure that is in part a Lord of the Flies story of children stranded in the Amazon jungle when the plane they are travelling in crashes and the pilot is killed. They have to battle the dangers of the jungle, find food, form friendships, and face the demons of their old past. As we follow their journey both literal and metaphorical through their journey we wonder who The Explorer is of the title? Fred maybe? Or Con…?

Then they stumble into a lost Mayan city and the explorer is revealed – sort of – and the story changes pace again, and one that leads them in finally escaping the jungle and reaching home. Only at the very end is it hinted at who the actual explorer of the title is.

The Explorer is as brilliantly a timeless story as all the best stories are. I’d place it post-colonial in time but the issues and ideas covered by it are still every bit as current. The authors note to explorers at the end is an important reminder to us not to take our place in the world too comfortably.