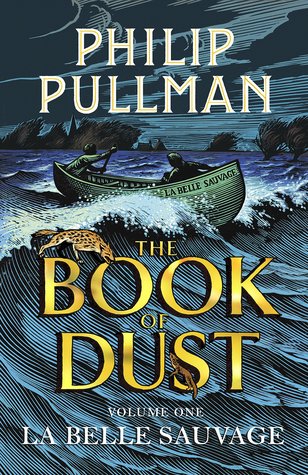 La Belle Sauvage (The Book of Dust, #1) by Philip Pullman

This is the long-awaited and much anticipated companion to Philip Pullman’s His Dark Materials series, and after the 17 year wait, I have been apprehensive about the book’s release. I had to buy it on the day of release, and planned how and where I would do so and I timed my reading so that I could begin it on the day of publication. But what if it didn’t deliver?

I was not disappointed. This is a book that from the first page to the last is Philip Pullman at his narrative best. Where at times, The Amber Spyglass could be over-complicated in comparison to the original Northern Lights, this was both dark and starkly relevant to the times that we now live, and a funny and engaging portrait of a world that’s not quite like our own.

The book is split into two halves. The first, mainly hops between opposite banks of the Thames from The Trout Inn to Godstow Nunnery (with occasional visits to nearby Jericho). The second, is an Odyssey-like quest that carries the reader south to London at the speed of a great flood pitching our hero from one danger to another. This is a classic adventure story, but a an adventure story with something to say about our own world.

If I had to make criticism of La Belle Sauvage it would be that at times it doesn’t read like the prequel (that it essentially is) to Northern Lights that it is. When Northern Lights was published in 1995, both it and it’s sequel The Subtle Knifemade it clear that Lyra’s Oxford and our Oxford were closely linked in time and space with just a few small but noticeable differences. They also read very much as contemporary books to the mid-1990s, and so this one, set 10 years before the events of Northern Lights should really be set in the mid-1980s. This book though, I find at least, reads very much like its set in the here and now of Lyra’s Oxford and not a that of a period piece set 30 years in the past.

The flood too, when it comes, is devastating – the worst that Oxford has seen in years – but even so I would expect some parts of the oldest, most central parts to be sitting like an island amongst the flood water. The geography of Oxford though is that is on a surprisingly large hill but no reference is made to this in how the river floods the city. And if it is as devastating as it it seems you would expect people to be talking about it long into the time of Lyra’s childhood in the other books.

These are minor grumbles though in an otherwise excellent book that has been a friend to me for a too short a time, and I can barely wait for the next instalment.