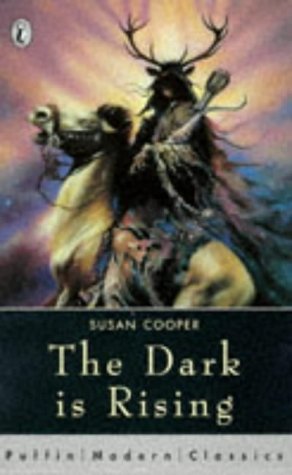 The Dark is Rising by Susan Cooper

I first read the entire sequence of The Dark Is Rising in the hot sunny conditions of a summer holiday in southern Italy – appropriate maybe for the first in the series, Over Sea, Under Stone but not so much for the second.

The Dark Is Rising takes place in Susan Cooper’s native Buckinghamshire, up into the Chilterns and down along the Thames during the darkest of dark times: Midwinter’s Eve through to Twelfth Night. I reread this now as part of Robert McFarlane’s global #TheDarkIsReading readalong and an interesting experience that was.

From Midwinter’s Eve to Christmas Day (probably a good two thirds of the book) it was an intense experience to match the intensity of the book. Because everyone was reading certain chapters on certain days and making their observations you got to gain so much more from the readalong. It’s also, oddly where the Dark seem to be so much more threatening and dangerous. Maybe it’s because I read this slower than I normally would of because of the way I waited for Eleventh and Twelfth Night before concluding the tale. This also showed up a possible problem that I had not noticed before in that when reading it in this way you don’t feel like almost a week passes in that last third of the book.

The Dark Is Rising is a quest book, to seek out the six signs of the Light and join them. The joined signs are themselves one of four great objects of power, and is based on the old Arthurian legends. I don’t know why but it took until listening to Susan Cooper’s 2017 Tolkien Lecture to realise the similarities between this story and John Masefield’s classic The Box of Delights. This too is a ‘modern’ retelling of the Arthurian myths, and features shifting in time (and place) and protected bubbles from which to rescue people or find out things, and both feature Hern the Hunter in a crucial role. They are distinctly different books.

Another thing I hadn’t noticed before to such an extent as I noticed this time round was how actions by our hero, Will Stanton, himself the seventh son of a seventh son relies on fate. He does things, and has to do things because he was born to do them. During the first gripping chapters he is not bound so much by this and they are so much more effective for that. A book dependent on fate or not, this is still one of my all time favourite books and will remain so, forever I think.