Sunday. The second of two leisure days. So, what’s on the itinerary? A boat trip, riding native horses (but round a paddock rather than the countryside) and a trip to a farm museum. I don’t think any of us were expecting from this the eventual day that we got… 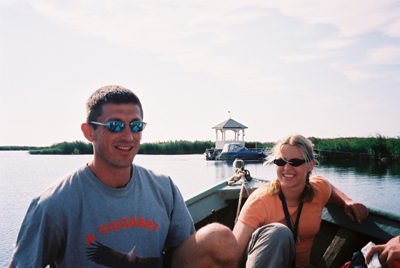 On route to where we will get the boat from we stop to pick up our guide from Friday afternoon, and we continue around the coast, eventually arriving at the narrowest of lanes, down which the bus lurches from side to side, arriving at last outside a run down group of buildings. Grabbing just our cameras and our sun hats and sunglasses from our bags, we are led through a yard full of bits of old boat and fishing nets, to the jetty (with it’s gaping hole wretched through the middle). As we approach the fisherman finishes emptying a small launch of eels. This boat, the seats now (mostly) clear is to be our transport. 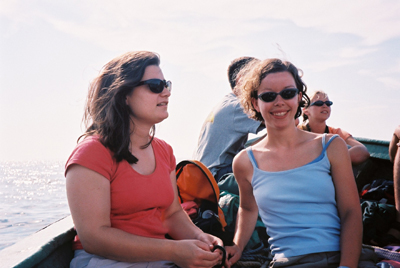 Our fisherman, throttles up the engine to a good musical beat, we cast off moorings and away. Steering our way between reed beds, the water is flat calm and is not much worse when we venture further into open water. We see plovers and auks, and sea swans, and the sun pours down upon us. I trail my hands in the water for a while, as we head out to and around a lighthouse. Quite why we have our guide on board we never find out, as no explanation is given – nor is one frankly possible – above the noise of the engine. It is interesting, though to see the island, which for the past week has been our home, from the sea, and it is an enjoyable time none the less. 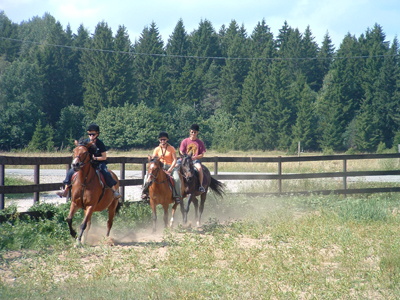 From the fisherman and his boat we go by bus to a stables at Kõljala where we spend several hours riding horses. Some of us are led round by staff, but others, like myself, who have had lessons take off by ourselves. On both turns I have a beautiful dark, chocolaty coloured horse called Angela (who has a young foul called Arafat), and together we trot round the paddock. My lessons of ten years ago have stayed with me have paid off!

Next stop: Jööri. A farm museum, this is where the plan is to have a picnic. Annika and Krista raided the supermarkets of Kuressarre yesterday, and the bags of shopping, which have since been secreted away, are now brought out and flung open onto a bench. As the bread, and the cold meats and the salad and the cheese are unpacked, and we dive into construct sandwiches, and fill our hands with food, so the flies also join us. And join us, they certainly do. In their hundreds, they appear from nowhere. Tim announces that he doesn’t mind them as they are not of the biting variety, they are still the biggest, blackest flies I have ever seen, and they are around our food in seconds in numbers that I am sure I have never seen. 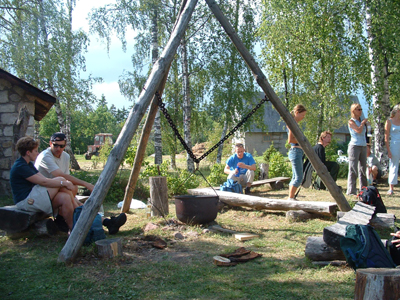 We retreat around the fire where the flies are steering clear of, and eat our sandwiches, and hand round the chips (?!!) from the bag to share.

Having chanced to visit the museum a day after they opened the new blacksmiths ( 02VIII03 – we are presented with wooden medallions to wear marked with today’s date and the name of the village: Jööri ), the local villagers who helped build it are still lounging around in various states of alcoholic stupor, enjoying a village reunion. They are pleased to see us, and hand round a galvanised bucket of home brew before challenging us to a tug-o-war. 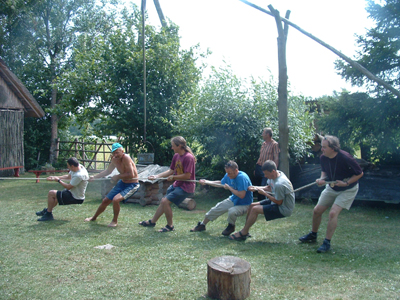 A team of male British volunteers go head to head with a team of drunk locals and we win, fairly convincingly (although what a drunk local second from front is doing on our team we only wonder later in the cold light of day with the photographic evidence in front of us?).

Following our success, the locals decide it would be fun to pit a team of female British volunteers (headed by Jane) against a team of female Estonian volunteers. Going against the spirit of all other national sporting achievements, the Brits win again. There is a subsequent dispute that drunk locals aided and abetted the team by holding onto the rope or tying it round a tree, although subsequent photographic evidence can not substantiate these claims. 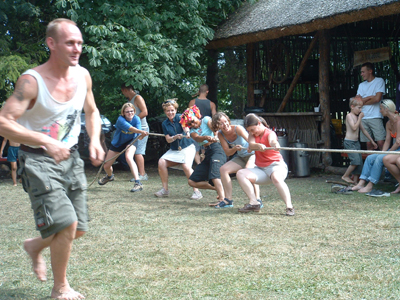 Whilst some go and make use of the basic (lavatory) facilities that swarm with a million and one flies and has no reading matter, others retire to the fire with it’s central cooking pot and sup home brew from the galvanised bucket (with the wooden lid, like the toilet) and also now swarming with flies, whilst Steve is challenged by a slightly worse for wear village blacksmith in a terrifying yet simple neck wrestle. The rules are never fully explained to Steve and he looses. He is however still alive, which considering the challenge set to him, seems like quite an achievement.

The sporting prowess of the locals is to be short lived though: they challenge anyone who wants to beat their best time in a sack carrying competition. Shaun goes first, and attempts to carry the smaller bag of sand the length of the course, then the medium bag, and lastly the large bag. He struggles, and the time far exceeds that of 22 seconds. A local demonstrates next, and reveals the secret: big first, then medium, then small, and to throw the bags over the line in any practicable fashion. Tom attempts it next, followed by Tim – he smashes the time convincingly, setting a new record of 18 seconds. 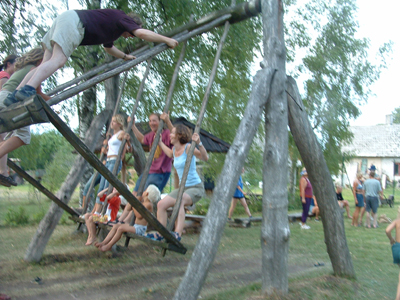 And so, with lunch nicely settled (by games), it’s time for a go on the swings … but swings here are not just any swings! Fashioned entirely from wood, and still resembling the trees that they once were, these swings are a communal activity in themselves for as many as will dare. Assuming that you are evenly balanced and you swing with the swing at the right moment, we can get yourself higher than the crossbeam – horizontal indeed, before swinging back the other way…

Our guide can not speak, or speaks very little, English, and so we wait (enjoying the swings) for Ester to arrive, and she translates for him, as he takes us around the museum, showing us the blacksmith, and the Russian fire engine with the funny conical bucket, so designed to make it utterly impractical for use other than in an emergency and so safe from theft under the Soviet rule. It is demonstrated to us the traditional manner of sawing planks and threshing corn, and of the contents of a storeroom full of amazing old equipment. Lastly, we return to the blacksmith where the blacksmith himself (he of the neck-wrestling) is on hand to demonstrate how a nail is held. The thunder is stolen from the demonstration though, when, in finishing off the nail, the head flies off his hammer into the corner. 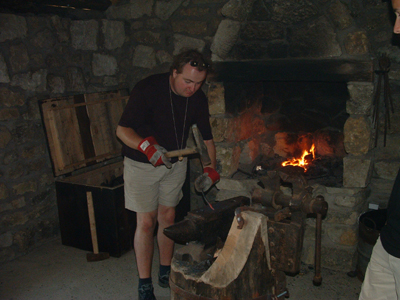 We are asked if anyone would like to have a go making a nail. Both myself and Steve raise our hands – it could be fun, couldn’t it(?!) – and Steve is presented with the gloves, and a rod of cast iron. As he waits for instruction, the blacksmith waves his hand and heads off in search of beer. Steve has a go, and roughly fashions a nail. He returns the rod to the fire and passes me the gloves, and I try some finer work to work the point. The blacksmith returns to inspect our work and correct our inaccuracies, but shortly later reports that he cannot continue. Why? Because, he declares, he is too pissed.

We slope off and enjoy a game of (what can loosely be called) volleyball. I start from a position of v.v.v. crap and progress on to slightly mediocre. Vicky joins us eventually, but does not hit the ball. Our team wins though, and we head back to Sutu for a swim (and frisbee) in the Baltic.

The Last Supper (at Sutu): 1.24 glasses, Russian champagne; 3.28 slices cucumber, 3286g mashed potato, eggs, MEAT, 4½ pieces of cake with fly-away icing sugar (and that was all just for the vegetarians! – Hannah Whelan).

Have you tidied your shed yet? and packed your bags? No.

It’s our last night on Saaremaa, and tomorrow night we will be back within the city walls of Tallinn. We party hard (and late) into the night in a manner that would make the Latvians proud. Taking over the undercover barbecue area, we set fire to the crazy golf in an inferno of a bbq. The evening begins, civilised enough, with three-legged, and wheelbarrow races (Note to self: As discovered by Hannah and myself, next time you find yourself in the position of having to participate in a wheelbarrow race it is much more effective to take the “barrows” legs at the knee rather than the ankles…). Much cheating persists.

We try a few more games, and then the British teach the Estonians the Hokey Kokey and the Estonians teach us a traditional drinking song which involves being around a table, on a table, under a table, and (it hardly seems likely) somersaults over a table all without breaking the chain of linked arms with your neighbour. Easier to follow is the rendition of Singing in the Rain complete with much hip swinging and a chorus of ZaZooZaZaa ZaZooZaZaa ZaZooZaZaa-Zaa‘s. 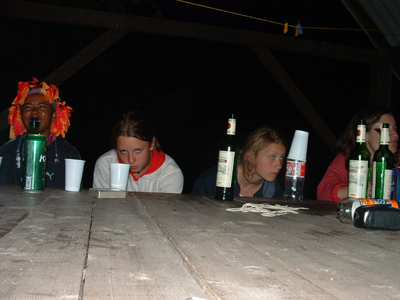 The evening winds on with rounds of cards – Steve leads a version of The Price is Right with forfeits of Jane’s Pepper Vodka for teams that fail to answer correctly. Tim doesn’t seem to have got the hang of the forfeits idea and continues to the pepper vodka away, as Annika and Anna consume cucumbers and tomatoes left over from the picnic. Distracted away from my diary, I hit upon a genius scheme of getting it written without writing it and subcontract it out to others, and Hannah writes up much of the evenings entertainment (Thanks Hannah! —Ed.). As the group starts to head off to bed, it is soon left to the original members of the Crazy Gang now extended to include Tom, Alice, Hannah and Tim, to play a game of Truth or Dare. Some interesting secrets are revealed, and no dares taken, although it should be noted that the instigator of the game seemingly failed to reveal much and avoided the dares – hrmmm…??

And so at a little after two in the morning (and five hours before it’s time to get up, breakfast and pack our bags), eight become two as the last six wind their ways to bed and we leave Tom and Alice alone around the barbecue (you know, I don’t think they noticed!)…

Day Nine: Salads all round in Tallinn, Tim’s amber shop, and Mouse Korma in the best Indian for 10,000 kilometres…