Sunday. Shortly after 3pm I was joined at Gatwick by Vicky – as promised from the Gatwick Express – and shortly after that by Steven (who I was vaguely aware of propping up a nearby column, listing it seems to names of people with suspiciously conservation holiday type rucksacks) who has picked us out from the crowd and approached us with the tentative “BTCV” enquiry. We nod – and introduce ourselves. Now we are three.

Jane joins us moments later with a more confident and assertive “You must be Vicky!”. There’s supposed to be a fifth person – Tim – joining us around here but there was some confusion about a connection from Manchester and whether or not he would make it in time, and he did say he was an erstwhile international leader and would probably be wearing a BTCV T-shirt and we can’t see any of those around – so we decide to check-in. Jane and I trust our luck that our bags will join us in Tallinn as they are sufficiently outsize to need to go through the outsize baggage which is currently broken. And so, having already sussed and dissed the elusive Tim as nice but dim, we head through passport control in search of last minute reading from Books Etc and a coffee.

Over coffee, Jane predicts that our flight will go from Gate 28 (reasoning that it will be one of the ones with the longest walk) and we settle back to introduce ourselves properly, enjoy a cup of coffee, and watch the departure board though Jane’s binoculars for news of our gate number. It duly flashes up. Gate 28.

We bounce along the conveyor belt and arrive in the departure hall, with Jane and myself heading like kindred spirits straight for the child’s game with twisted loops of plastic and beads – some kind of strange cross between an abacus and a test of nerves game without the ringing bell. Jane spots a guy in the black T-shirt and declares it is as a BTCV T-shirt, shortly after he has paraded the departure gate breast stuck out like a pigeon looking for anyone that looks like they might be conservation volunteers – walking straight past the two grown adults in their thirties playing on the child’s toy (I mean honestly, how more obviously a conservation volunteer do you need to be than playing with child’s toys?!!).

Potential Tim spotted and a spot of banking done of big Kroon for small Kroon and we decide to introduce ourselves. The black T-shirt itself is a BTCV one, but with a logo so discreet it is almost invisible, but Tim seems nice enough and not at all dim…

The plane, it turns out, is hardly a plane, being no more than twenty rows of seats in length. The in flight entertainment consists of nothing more than an adequately stocked drinks trolley, one of the best in flight meals I’ve ever tasted, a bizarre and impossible crossword from the free copy of the Daily Mail which Jane picked up upon entry and lasts with us through out the holiday, and the delights of dubious English translations in the in flight magazine (what exactly are pompous promenades?!!). 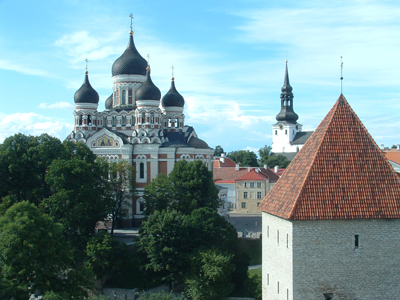 The sun is only setting when we descend over Estonia (at about 10:30pm local time) and so we are able to enjoy picking out a few silhouetted details. When we arrive we find Tallinn airport clean, new, and tidy – if also with scary looking border guards at passport control behind bullet proof glass, locked doors and officious signage. Tim get’s his passport photograph checked through a magnifying glass, but we all make our way into the country without interrogation and for three of us, the first stamps in our passports.

Somehow we find a Takso (Taxi in the local tongue) and get to our destination – Uus Street, 22 across to the driver – a stocky-built man who speaks little English and drives a Merc. the journey across town is – interesting – the roads are potholed and riddled with tramlines at every junction and lights that appear to flash nothing but amber and seem to mean proceed, and if you’re fastest, you will get through our okay. 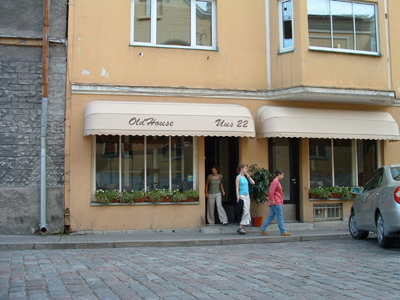 We’ve since left Tim to his own taxi and his air-conditioned Hotel Olympia, and so it is the original Gatwick Four who confuse the night receptionist at the B&B and upon finding our beds (Jane, Vicky and myself to our 450EEK single rooms and Steve to his 290EEK dorm) we settle back in the kitchen to chat before bed, drink going on twelve pints of water between us and fan ourselves with placements.

Day Two: Sleepless nights and drinks in a prostitute’s prisons…