Hay Making and Rides in the Mobile Sauna

Wednesday. Our thirty-seater German school bus arrives shortly after 9.15 to take us to the farm and to our first day of work. It is after barely 5 minutes when Tim rewards us with the first mention of his leadership experience. The Crazy Gang, seated in window seats down the length bus on the opposite side let out a Mexican wave of laughter, scoring the first point in the air. Our outburst is noted, but no one has a clue what it’s all about – least of all Tim… 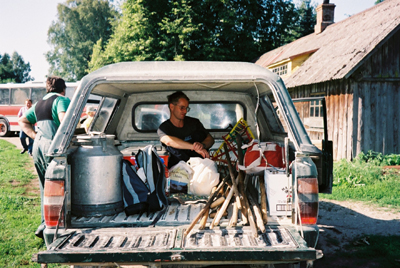 Once at the farm, we change vehicles for the truck, the car and the van. In the relative cool of morning, the heat within the mobile sauna is not as intense as it was yesterday. On route down the bumpy track, as we all take photos of the van interior for our records, Tim slips in Leader Remark, number two. 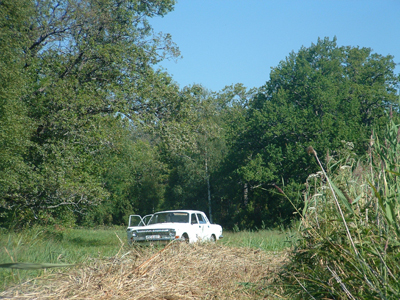 Upon our arrival at the hay meadow we layer up with suntan lotion and insect repellent, practice our swatting skills and listen to Tom’s tool talk. We divide into groups, and embark on raking and forking of hay and reads, ready for the bailer. The morning drifts along punctuated with frequent breaks to gulp down water, re-apply insect repellent and sun cream. I chat with Paul about this that – and we realise during a break for photos that the farmers car is actually (parked, doors open in the middle of a hay meadow) Mr Weasley’s flying car from Harry Potter 2. Tom reveals that he’s guessed there’s some wager up, so I admit the Crazy Gang’s competition after first swearing all in earshot to secrecy. 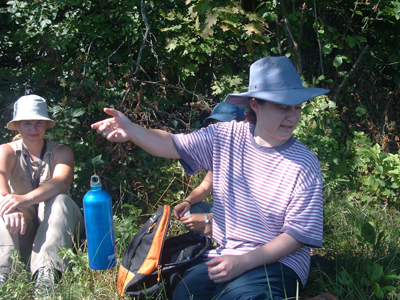 By coffee time, the Leaderwatch is up to 5, and it’s somehow more fun to watch him now that everyone else knows what’s happening. Jane succeeds in lifting her water bottle up with a single blade of grass, and we each refill our water bottles from the churn in the back of the truck which is deliciously cold. 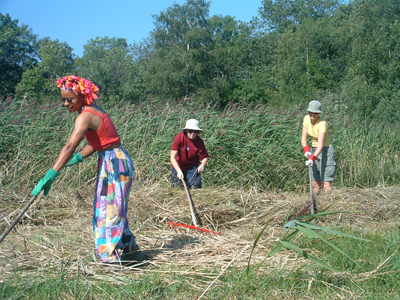 With the smaller two areas of meadow completed, it is a united assault on the last section of meadow, and Jane and myself head to the front to make the advance on unraked grass. We get into our stride, a routine, and a rhythm, and by lunchtime we are within an hour of finishing. Our 1 o’clock return to the farm has to be in the truck, as, despite it’s uncomfortableness The Van has taken on a mythic draw. Jane rides in the front alongside Hagrid The Farmer and manages a brief and stunted conversation in German about her job: working for the BBC and the Philharmonic Orchestra. And I ride in the back. To find my self trapped between a pitchfork and a water churn at journeys end when Jane jokes, oh leave him, and Hagrid does. I am released though, and join the others in another serving of soup (with some additions) from the big pot served with the big ladle. Over lunch, Annika receives a call on her mobile that Tim’s passport and BIG zoom has been found in yesterday’s bus, and will be dropped off back at Sutu later on that day.

By the time of our return to the meadows (this time for me in the front of the truck), Tim has guessed that we are counting the number of times he mentions something, but he’s not sure what. When he joins Jane, Paul and myself in another part of the meadows that Hagrid takes us to, he spends much of the afternoon discussing his relationship with Julie as this is something of which he hasn’t talked and so can’t be what we are counting. For the record, Leaderwatch is up to 7, and yet if anything he thinks the subject is Namibia. 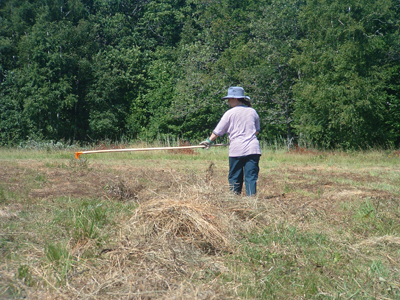 One by one, the rest of our group join us, as they are let go from the other stretches of meadow, bringing with them fresh supply of water. By four or five o’clock we have finished all that is required of us here and we board our vehicles for the ride home. Tim joins us Steve, Hannah and myself in the Harry Potter which Annika drives, but the curse of the tooth, having been unsuccessful at separating Tim from his passport is activated again. The car breaks down just short of the end of the woodland, and despite pushing, and tinkering of bare wires under the dashboard, and poking around under the bonnet there is nothing for it but to be towed back by the truck. I try valiantly to make the car fly, but it is no use. The curse has wrecked the machine. 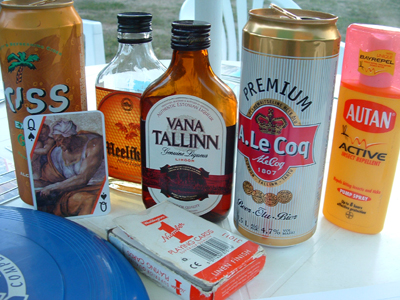 Later that evening, the curse is even more disturbingly evident as Tim comes down with a tummy bug, although he does not realise till later how fortuitous this was, for in his desert on the vegetarian table, Paul finds a shard of glass several inches long!!

As the evening wears on, the Crazy Gang can again be found playing cards till late into the night. I redeem myself at Hearts (from the night before), as potential new recruit, Tom (which for reasons that now escape all of us, he subsequently fails) takes the honour of the last place…

Addendum: It is decided by mutual consent of the Crazy Gang that considering Tim’s current ill health and because he guessed something was up to nullify the results of the wager.

Day Five: Exploration into the woods, the sampling of liquors, and the cross cultural exchange of blond jokes and tongue twisters…