The woods, frisbee, liqueurs and tongue-twisters

Thursday. We return to the farm in our school bus but this time not to transfer to a collection of faithful if ailing vehicles. The woods where we are to be working are just a short walk through the potato field at the back of the farm. To save us the bother of horse-flies and mosquitos Tom performs his Tool Talk in the garden (where we are used to siesta in the mid-afternoon sun), instructing us in the safe use of bow saws, loppers and billhooks. We then descend on the woodland where Hagrid can already be heard hard at work with his chainsaw. 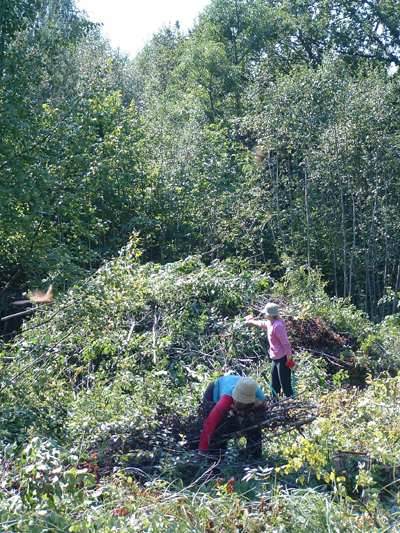 The work is to gather and stack cut wood, and cut what isn’t in preparation for bonfires and the restoration of this area to a traditional woodland meadow. Steve, Hannah, Jane, Vicky, Paul, Ele and Karin opt to work in the first shady area (and for the sake of convenience we shall them Team A). It is reported later that they quickly adopt Union Rules and adhere to a strict work ethic, involving frequent and regular tea breaks and everyone downing tools and enjoying this communal activity. 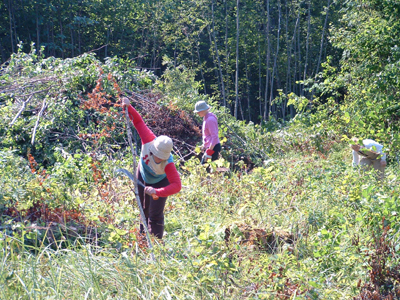 Team B, consisting of the rest of us, move further on to woke in full sun clearing a larger area. This group sub-divides, and after some minor confusion as to what we are doing is sorted out, Alice and myself set off to work over the far side. We are joined during the day by Tom, and I get to feel increasing like a spare part as flirtation between Tom and Alice intensifies.

To this day, it is unclear as to how what follows actually transpired, but by post-lunch siesta, Vicky is revealed to all as Da Boss – the criminal mastermind behind the antics of the Crazy Gang. Tim has always (from the outset) declared Jane and myself as “trouble makers” (as far as we can see, the only evidence he has for this is our playing on the children’s toys back at Gate 28, Gatwick South) – and this despite the irrefutable proof that it is Tim who has brought the most trouble to the group in the form of the unleashed the Curse of the Sacred Tooth – however it is universally acknowledged that it is the quiet ones that you have to watch, and Vicky is quiet. She also as that grin, and those ever-watchful eyes. She also never denies that she is not Da Boss, choosing instead to just grin and watch. 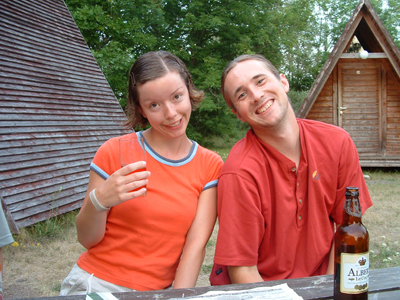 It has been a hot day, and by the time of our return to Sutu, I decide to join the Swimming Gang for a bathe in the Baltic – and very refreshing it is to. It is also not all that salty – the water is alluring and I wonder why I was not tempted to swim any sooner in the holiday. Indeed it is so alluring that even Jane Vicky are tempted in for a paddle. They paddle out beyond the point of no return (in that their shorts are thoroughly wet through however they choose not to go further and join us in the deep, they say, because they had the likes of cameras with them. They do vow to come swimming tomorrow though… 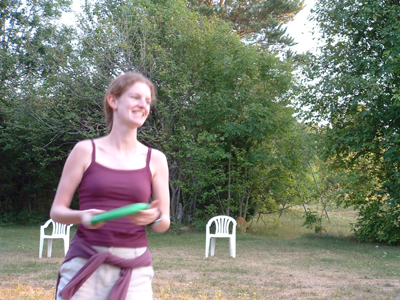 Another excellent potato-based meal later and a game of frisbee follows – followed by more card games, the arrival of Tom’s FairTrade chocolate supplies, and the first appearance (since the first afternoon in the Tallinn park beneath the statue) of Steve’s Honey Liqueur, Jane’s Pepper Vodka and my Vana Tallinn.

Fuelled by food, beer, sprite and spirits the evening wares on with an exchange of blond jokes – this one as told by Annika (a blond):

Q: How many blonds does it take to change a light bulb?
A: Five. One to stand on the table and hold the light bulb, and four, one on each corner to turn the table around.

Q: Why shouldn’t you wear Russian underpants?
A: Because of Chernobyl fall out.

and an exchange of tongue-twisters:

…whatever that means, but there was something about the special organs of the cow which confused the life out of Tim!

Day Six: A last [half-]day of work, swimming in the baltic, and tea and samovahs…