Whatever did happen to…?

Monday. Rising from my slumbers at six-thirty, I shower and repack my rucksack for the day ahead. Later, as others emerge from their rooms, and we discuss how much sleep we have or have not managed after the relative disruptions of intense humidity followed by over-active minds circling through the day’s and future events, and of how just as sleep was about to overtake us, seagulls swooped lover overhead screeching above us. Vicky admitted sleeping well – much to Jane, Steve’s and an my horror and disgust. 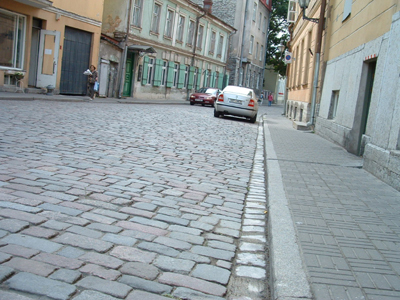 We breakfast on Karma – a porridge-like substance of buckwheat and oatmeal and other grains (which I’m sure would have been nicer had I known what I was doing!) mixed with two type of yogurts, some slightly odd looking cornflakes, and cold meats with dark-malted rye bread.

During breakfast Steve mentions to us the two lads, who, upon leaving the guesthouse as we arrived last night only returned to their beds after a night out partying in Tallinn night clubs as we were stirring. He also informs us (as our spy in shared quarters) that there are three or four other BTCV volunteers in the guesthouse. We meet one, Alice, straightaway over the kohvi, and she tells us of our flight out yesterday, of changing at Stockholm when it was only her doing this route and of having to venture down deserted passages to ring bells outside of locked offices. She seems eager to join us on a walk round Tallinn but by the time we are ready to leave, Alice has already been whisked away by (the then only supposed volunteer) Hannah, whom we have yet to meet. 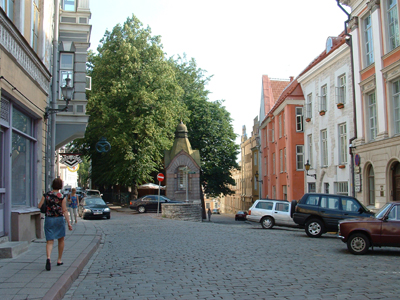 and so, at about 10 o’clock with the sun already climbing high into the sky we set out into Tallinn Old Town – Jane only just remembering to switch on her mobile should Tim phone us to meet up (as was tentatively agreed that he would) in the taxi rank outside the airport last night.

Uus Street, 22 is near the edge of town, and yet as we cross the cobbled street, pass down past some very nice houses with highly photogenic doorways complete with peeling paint work and crumbling plaster, peruse the shop windows of some very fine patisseries and antik shops, it is no more than 10 minutes that we arrive in the centre of the town – Town Hall Square – there’s not a heck of a lot of town… 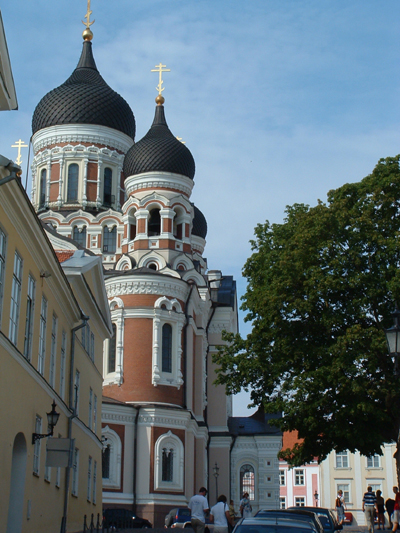 No phone call from Tim we explore around the city, and take twisting – turning – interesting and picturesque streets up Tompea Hill to the orthodox church that is the Alexander Nevsky Cathedral with its onion domes and multiple towers. It’s hot and we rest under the trees, negotiate with the postcard sellers and there 2 for 1 offers, and explore inside the church where Estonians in their national dress are taking daily service.

We head off again around a castle and the city walls, finding through an unmarked, small unprepossessing doorway a further entrance into a darkened chamber which turns out to be a bar. We proceed in further, passing beyond the high-backed solidly built oak chairs up the stairs to another level, and another bar. We ascend further to another bar that leads out onto a terrace – the wooden ramparts of the old city walls. As we settle down with our drinks and enjoy the tranquility of our surroundings, it’s only later that we discover that this was once a prison for prostitutes.

With a view out one way to the sea, and another to the newer suburbs we enjoy our long cold drinks of lemonade and consider the map of Tallinn – liberated from the in flight magazine and the crossword from the Daily Mail (also late of the Estonian Air flight).

At a little after twelve we descend from our resting pace and wander back round the outside of the town, entering back in through a maze of little cobbled streets. 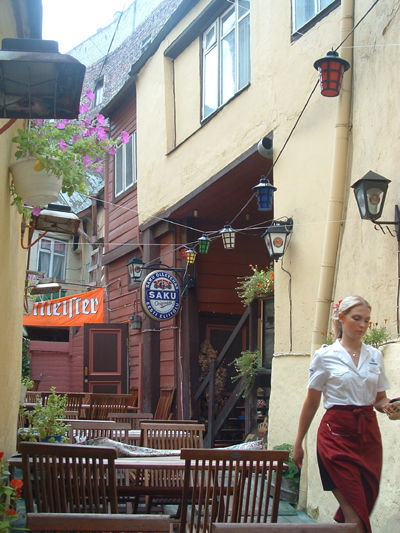 Lunch is had in the courtyard garden down the side of the Black Sea bar/restaurant just off Vinur Street. We order meat and fish salads and a glass of the local Saku beer – and as we settle back in the sun, Tim’s text arrives three hours after he sent it.

1020 hours. Do you want to meet up in Tallinn? A text? Why has he texted us? He should have phoned and got through… We try and phone him in return with our location, hastily established from our obliging waitress, but we can’t get through – he must have turned it off. WE send a text in return but with little expectation of his receiving it by the time of the pickup at three-thirty this afternoon. Again, we revise our opinion of Tim, nice but…

Lunch is good and we head off again into the Tallinn streets finding shoe shops and department stores, a McDonalds complete with plastic yellow “M” right next to the beautiful old gatehouse and its repunzal-like, ivy-covered towers. We venture out further, Steve in search of a supermarket or pharmacy to stock up on insect repellent. We pass stall after stall of flower sellers opposite shop after shop of alcohol stores. We suppose that the latter must be for the night and the former for the morning after apology. Anyway we venture into one store, coming out some half an hour later with: Jane, Pepper Vodka; Thomas, the local Vana Tallinn; and Steve, Honey Licqor.Maybe foolishly we leave behind the garlic vodka, but perhaps it’s something we should have at least tried. 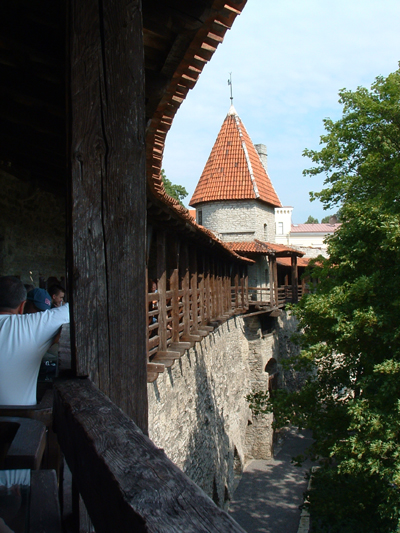 We wander some more streets through the town in the afternoon sun, seeking shade as often as we can, before arriving back outside the Oldhouse at Uus Street, 22.

Descending into a bar opposite, Vicky is buying a round of drinks, as a voice crosses the bar from a nearby booth that provokes guilty blushing.

“Oi Vicky!” It’s Tom, our leader that calls our name. He’s sitting with his Estonian counterpart, blond haired, pony-tailed Annika Liitvak, and Tim – who it seems has already told Tom all about us four, and dubbed us “Crazy but Cool”. It is from this moment that the term Crazy Gang is applied to, and remains with us.

Introductions are quick and to the point before Tom and Annika leave us to sort out the bas that is to take us to Saaremaa and to seek out other volunteers. Half an hour later, Alice has joined us too with (the now confirmed conservation volunteer) Hannah, together with Fiona and Gordon, along with some of the Estonian volunteers who will be joining us. Loading our bags onto the trailer we board and return through the suburbs of Tallinn to the airport where we are to be joined by Paul and Charis and hopefully the mysterious Shaun.

In the end we find some more Estonian volunteers, Paul and Charis minus their luggage – which as decided to detour via Slovakia – but no Shaun. Tom leaves a message with Shaun’s emergency contact (apparently he flew out last Thursday), and makes contact with the BTCV office back in the UK, but there is little else he can do. A little after four o’clock, we hit the road to Saaremaa. 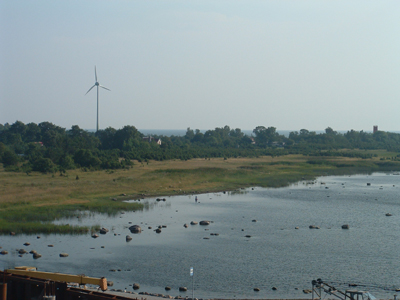 An hour and a half later we board the small ferry across to Saaremaa, and then we are on the road again. A game of Cheat at the back of the bus between those of us who are (allegedly) crazy but cool (so that’s the Gang of Four: Jane, Vicky, Thomas and Steve!) with a lunchbox between my knees serving as a table. An hour or so later we turn off a minor road onto an even more minor road and are unloading our rucksacks into the chalet-wooden-tent style accommodation.

We dump our bags in our chosen chalets and head out the 100 metres or so past a dilapidated crazy-golf, old swing, and some sort of rusted, gallows-type erection to the coast. Tim braves the sea, walking several hundred metres before reaching a waist depth of water. Hannah and some of the Estonians follow bravely, whilst the rest of us linger back shyly and swat mosquitoes.

Our first meal of potatoes and salad vegetables in a sauce followed by yogurt for desert meet with appreciative noises from all of us but in particular from Jane – who, sitting opposite me, freely admits she likes her food – and apologises for the repeated hmmnn’s.

After dinner we settle into our chalets for two – universally decide that like in Tallinn, sleeping bags are unnecessary – and retiree to the bar for a glass of Saku.

Shaun has meanwhile contacted the group, having been travelling via uncertain means through Europe and South Estonian and arrived at the original accommodation. Annika and Tom have left to collect him and we are all under strict instructions to be nice to him when he arrives.

We talk, and play cards – and pigs (incorrectly) – a thunderstorm of thunder and lightning but no rain around us, and Shaun arrives, going round the group careful to shake hands with everyone…

Day Three: Climbing inside church roofs, walking out to sea horses and taking a ride in a Russian van…