Turning Off The Rain

Thursday. Driven out of my bed at five-thirty by an increasing chill I discover a thick dew on the ground and ice crystals on my tent. Washing in bracing conditions at the outdoor sinks is worth it though as I witnes a spectacular sunrise over the canyon wall and the perfect colours of morning light against a beautiful blue sky.

Having breakfasted on cereal with fruits and skyr, made our lunches and prepared our day’s quantity of coffee, filtered direct into the flasks we set out in the ‘A-Team’ van, windows blacked out, on the long and rutted road to Dettifoss. At one point our driver takes a dried out river bed a touch to fast and throws the four on the back row crashing into the ceiling. Sittin in the penultimate row of seats I have been jolted out of my seat I am saved an unplanned meeting with the van roof.

Leaving green shrubland we journey out across a moonscape of rock and dust. In the distance, what at first resembles smoke billowing from ground is in fact the spray cast up by the falls out of the canyon. We arrive inthe car park, a cleared area of sand marked out with loose rocks and featuring the conveniences of an information board and a thunderbox toilet (a hole in the ground with a teepee over the top). The only water is a tank of handwashing water unsuitable for drinking, and of course the river itself – also, being glacial runoff, unsuited to drinking. We are here for the day with only the provisions we have brought with us. 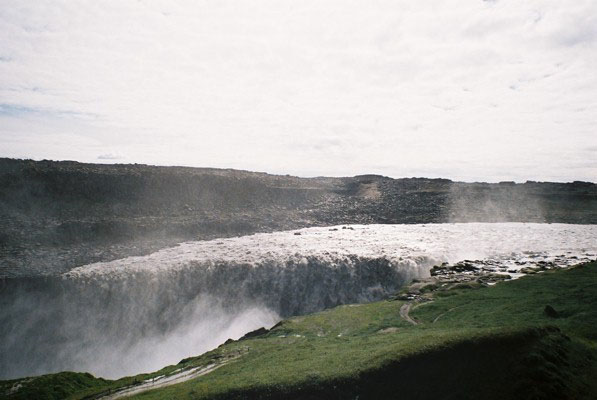 Chas and Sara, having taken us on the dcurrent path to view the brutal force and display of sheer power that is Dettifoss. I am suitably impressed, but find that for all it’s churning grey-brown water and fast flowing current, it lacks any semblance of grace and finness. Teh park manager, KÁri, whilst keeping a watchful eye over his five year old grandson Sindry, explains to us about the falls, how they were created, it’s importance. Our task is realight the paths along a – if less direct – then more level path. It is to be disabled access we are told – to which we are left wondering upon the mechanics of Icelandic wheelchairs.

I begin work with Jenny on a short section of path close to the falls and we shift some small rocks. Clearing this quite quickly (or rather discovering that the little rock protruding from the ground was literally the tip of an enormous coffin sized rock and deciding that upon reflection it was best to leave it), we move on across the moonscape. As we do, swapping groups here and there we become more ambitious – heaving huge rocks out, crowbarring the rocks out of the ground, leaving craters and graves to be filled later with surfacing.

near to the end of the day a rock finally defeats us, but we are told by Sarah that KÁri has a machine that will deal with it… 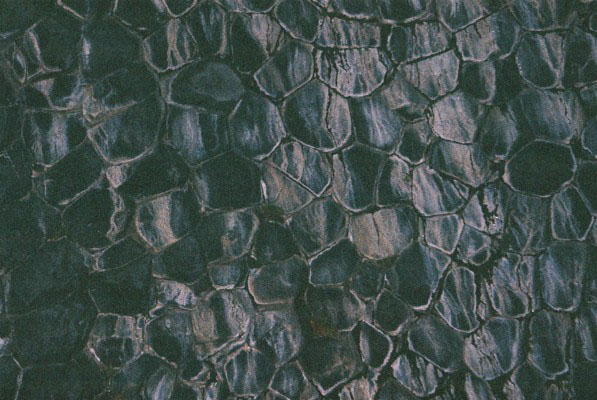 Pitstopping back at camp we head off sans cooks to take showers at Ásbyrgi, returning to find supper on the table and waiting for us – a good meal of spaggetti bolognaise. We followed this wth a walk down through the canyon on the flower trail and Sarah showed us the trolls where they had been turned to stone, the Echo Caves, and a church made naturally frm the formation of basalt columns.

Friday. After the exursions of the day before I slept long and deeply for the night, not feeling the cold and rousing with only just time for breakfast, before we are again out on the worksite. For the morning we work within the spray of Dettifoss, squelching and sliding through mud on the edge of a perilous edge, removing the old (and dangerous) steps out from under the feet of tourists as they climb down to get a better look at the beast of a waterfall. It is nice to go back up top at coffee and again at lunch, turning off the rain, and drying ourselves out a bit.

After luch, Sara takes pity on us and we return to our path to shift bigger, badder rocks! Working mainly with Jenny, Phuong and Alex – and sometimes, when we need someone strong on a crowbar, Larry – we contintue to clear huge sections of path and work our way surprisingly very close to the car park. We end the day’s work surprising Sara at how much of a suspected solid stone bank we manage to dismantle, piece by cracking piece.

Whilst number two cooking group make a start on supper we once again take to the showers at Ásbyrgi and buy postcards and chocolate at the petrol station.

A meal fo fish is followed by an evening in the company of the rangers in the warmth of their hut enjoying pancakes nd delicious homemade rhubarb jam. Once again my endeavours to write postcards are thwarted byt the night long Icelandic test to see any of us are ready for marriage.

It is said that when you can make a pancake thin enough that you can read a newspaper through it then you are ready to wed your love. Mostly our pancakes were thick (though still tasty) with some notable exceptions – Claude’s interesting map of Iceland or Melissa’s plain rude inclusion. Some you could indeed read throught but these did not canount as would be reading through a whole in the pancake.