Tuesday. Arriving at Heathrow Terminal 1, the adventure begins with the first task, the excitement of spotting fellow conservation volunteers. More thance do the four letters B, T, C and V get put together a question, result in blank looks and confused responses. Claude is the first of this years that I meet, approaching me with uncertainty. Claire is the next as I pick her out wandering lost near the the Icelandair ticket office with rucksack and sleeping bag.

Within a very short time of this we are all gathered together swapping names, trying desperately to remember them together with their correct faces. Three hours later and we are walking away from an uneventful flight into blazing sunshine and clear blue skies over Keflavik airport. Chas Goemans is there to greet us – and recognises me – as does Sara, a VO from last year, and our leader for this years holiday. Within no more than half an hour of our arrival our bags and rucksacks are transfered to a trailer and secured under a tarporlin and bungee ropes. We ourselves bundle into the blacked-out van that disappears for miles to the furthest reaches of the back seats, and drive off towards and through Reykjavik on Route 1 – around the island to our night’s stopover on the north coast.

During the six hour journey, punctuated with numerous stops at petrol stations for toilets, chocolates, or hot dogs we are given ample opportunity to get to know our fellow volunteers. I discover that the ginger haired Alex that I found I vaguely recognised, was in fact the same Alex Martin that I met previously in 1998 on a National Trust working holiday in Mathry, cuttng gorse in attrocious weather conditions and repairing the Pembrokeshire coastal path. 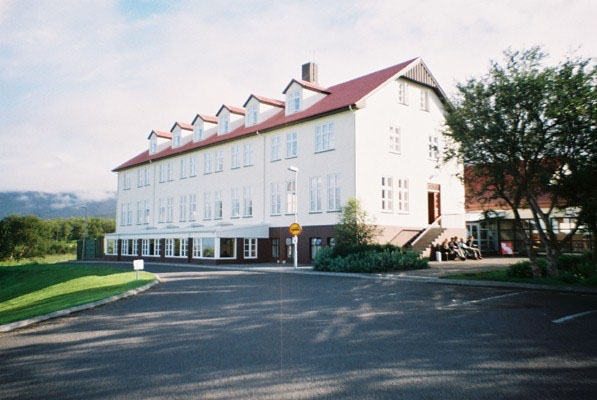 At nine-thirty, and with the sun only beginning to set we arrive at the City of Hölar – agricultural college with a population of 100. We are given a welcome meal of unspecified meat soup and settle into sleeping bag accomodation in two of the classrooms, watched over by some frightening Harry Potteresque dignatories on the walls. In a last conversation before bed we are told a story of some girls who slept in the rooms on the top floor and had their jewelery stolen by ghosts. Thankfully, these ‘ghosts’ did not visit us tonight.

Wednesday. ‘Welcome home to Hölar!’, we are greeted in this way by Bjäkk, our tour guide for this morning. This is the traditional welcome for all people, no matter where they come from, or where they are headed, for Hölar is regarded as home to everyone.

We breakfast early on cereal, fruits, yogurt, cheese and salad – the Icelander’s definitely know how to do the first meal of the day. This is followed by a leisurely hour in the blissful heat of the outdoor swimming pool watched over by cloud covered peaks and the cathedral tower. The cloud soon clears leaving sunshine for the rest of the tour.

Bjäkk – for ever after known as the fish man from Hölar – introduces us to the history of Hölar cathedra, the sometimes gruesome histroy and it’s artistic splendours which include a very equisite carved soap stone baptism font signed by the artist with ‘angel faces”.

He then show us a restored and a reconstruction fo Icelandic turf roofed houses, and takes us on to learn of his aquarculture research, showing us round his aquarium and explaining the limited diversity of Iceland’s freshwater fish. There are only six types of freshwater fish adn three are artic char, salmon and brown trout. Bjäkk goes on to explain how despite this, with the differences of rocks and lava formations beneath the surface, it is possible to have variations within species even with the same lake or river.

By one o’clock we are saying goodbye to the City of Hölar and are back on Route 1 and going travelling around the perimitre of the country.

Faced with ever changing scenery of stunning proportions – lava fields to lush revenes or grassy plateaus – we next stop briefly at Akureyri – Iceland’s second metropolis. We get an opportunity to explore the shopping precint and stumble ito a child’s baptism in the church wilst Chas and Sara gather further provisions from the local supermarket.

As we head off towards Husavik, we leave behind clouds adn journey into clear blue skies and warm sunshine – if also a cool, and sometimes bracing breeze. 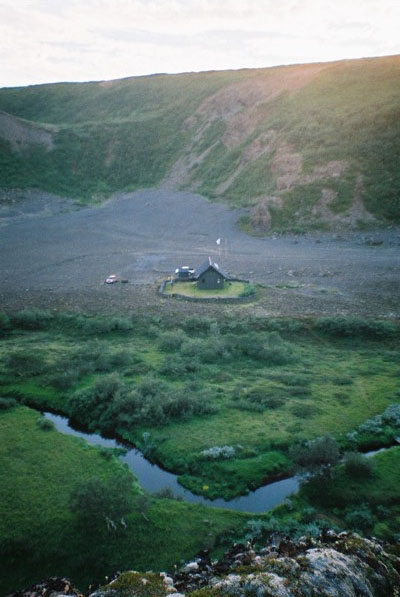 At six-thirty and with conditions that are of about two in the afternoon back home, we arrive at our campsite at Vesturdalur and strike camp. With homes errected we make drinks of coffee and hot chocolate and wak up the cliffs to survey our territory. From a high outcrop of rock we can survey first our camp and the ranger’s hut sitting in a garden of green behind a dry stone wall, overshadowed by flag poles and surrounded by the desolation of a dried up river bed – like a zulu encampment waiting for the cavalry to attack. From here we can also see when when Chas returns with the van and trailer with further provisions nadn the mess tent. 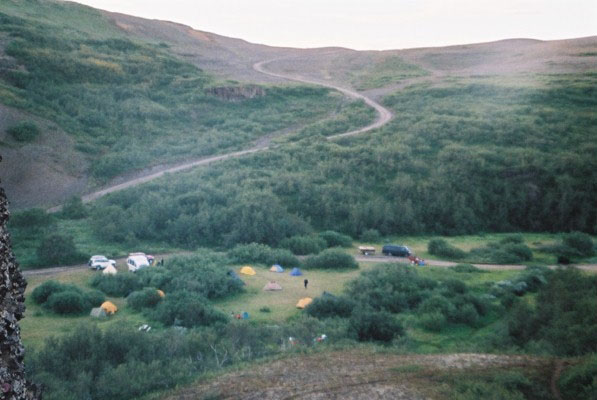 All is action again as one group make the night’s supper, another erect tables and chairs, and a further group struggle (easily) to make the mes tent fit in the area between the bushes.

We feast simply on pasta and cheese this first night, cozy in our new home, and retire early (midnight) to bed.

Chapter Two: Canyons, rock bars, a lunar landscape and getting wet in Dettifoss…