After our six o’clock rising to strike camp and breakfast in time for our 8 o’clock bus, we naturally enough wanted a few hours sleep (just to catch up). As it turned out we just about managed about one, before our bus veered sharply off the road just after Kirkubæjarklaustur (commonly known as Klauster, pronounced Cloister). The road we now took was made, in the sense that someone had come and scraped the larger rocks off the ground and put them on one side. The bumpiness was severe, and would get worse. As we drove further and further into the interior, so the landscape changed to a wild and at times desolate yet strangely beautiful landscape of rocks and lava formations, of steep-sided vallies and high moon-like plattoes – it’s easy to see why NASA once used Iceland to train there astronauts in readiness for the moon landings. 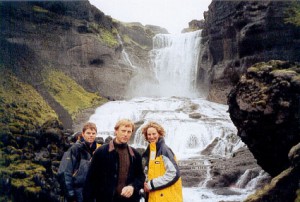 We stop at around half-past eleven for a toilet stop (not that there’s a toilet – not that there’s anything much besides us and our scheduled bus service) and are given the opportunity to walk to the short but scenic walk along a lava strewn valley floor to the waterfall of Ofaerufoss (pictured), a much more dramatic affair than the slightly disapointing Svartifoss that we now take for granted. After some nervous discussion about whether the bus was leaving at 12 o’clock or twelve-thirty – it having taken half hour to walk to this spectacular Foss – we take the precautionary measure of sending the Gazelles back ahead of us to keep the bus till our return.

Upon our return to our bus, no sooner than we cross the ‘car park’ but the bus is revving it’s engines, and no sooner than the last person is on board, is the bus driving away. Now to fully comprehend what happens next, it is important to remember that this is no special vehicle – just an ordinary coach type of bus that you would find dropping the kids off at the farm park, or the swimming pool, or ferrying you to Heathrow. Once you understand this you now have to visualise this bus fording a river, not at a ford but just across the river bed, and then climbing steaply over a lava ridge, crossing a lava field and plunging at an alarming angle down a narrow track on the far side. It might then go on for another mile or so on the level but down the length of a river bed before turning sharply up another lava ridge, and so the cycle goes on … a spectacular route to a spectacular destination. 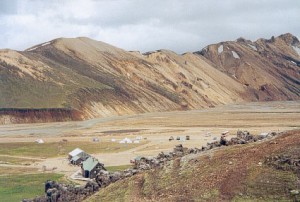 Landmannalaugar is spectacular place, in the heart of the Icelandic highlands, accessible only during a few short summer months. It’s mountains are a haunting shade of multi-coloured colours, rich greens, lime greens, purples, reds, oranges and dusty blues … and from each one hot springs rise. At Landmannalaugar itself there is an established campsite (much like Skaftafell except here they didn’t even make any pretence at covering the rocks with grass), a hut where you may (and we did) stay, hot showers, and ofcourse a hot pool. Upon arriving we make our way across to the hut, and are shown our room – I say room, because that is what it was, one room for twelve of us. This room, up in the roof of the hut had a door at one end, a window at one end, and a table between the two beds on either side – two huge mattresses suitable to sleep eight a-piece. Here we would make our beds for our night’s stay. 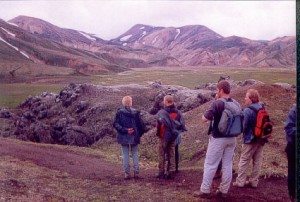 After a quick lunch of Flatbrauð and smoked trout, we head off, guided by Chas, through a lava field in search of hotspings. Collecting small pieces of lava, basalt and pummice as we go, we admire the beauty of the place, and once free of the the tourists we make our way across a flat stony valley bed, jumping rivers to wher we are told there are some fine examples of hot springs … and are soon impressed by, in retrospect, a piddly little example… 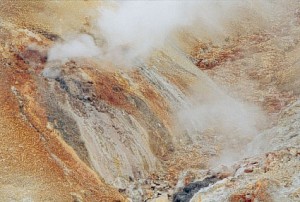 Aside from the faintly unpleasent smell of sulphur (although no worse than the tapped water back at Snorres’ in Reykjavik) the hot springs are noisily bubbling outbursts of water, colouring an already colourful rock with yet more striking whites, or brilliant yellows. We take our fill of this natural marvel and return to Landmannalaugur for a well-deserved drink and a soak in the natural hot pool.

Reached via a (at times alarmingly springy board walk), you first find a small changing platform above the hot pool itself. Formed where a cold stream meets a hot stream, to reach optimum temperature you must ease yourself around the river bed until you find a temperature that suits you. Once found you remain there, never budging (unless the coverted hottest spot becomes available) for fear of losing your place to an interloper. There you can remain for one, two, three or even four hours, gently relaxing, and chatting with your friends, and (should they depart after four hours) a range of other cultures and nationalities. The only thing you should remember is to remove any silver piercing you may have else have it turned black by the sulphur. 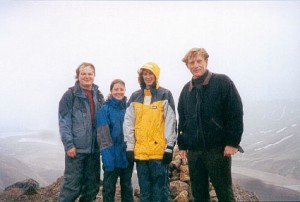 That evening we stay up late playing cards, and drinking Swiss Miss Chocoate with added marshmallows whilst dipping into bags of Salt and Pepper, and Paprika crisps, eventually retiring to our communal sleeping arrangements. We awake on Saturday to our last full day in Iceland, and just have time to quickly climb a mountain, take in a fine view of grey clouds, take in another couple of lava fields, board the bus, stop off to gaze at Mount Hekla before returning on our way back to Reykjavik. 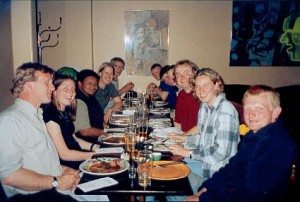 Arriving back in Reykjavik at 7pm, we just have time to return to Snorres, unload ourselves, change our clothes, quickly wash, before heading out to a fantastic meal down in the town centre (of Lobster salad and Artic Char in a Barley sauce, followed by a monster of a slab of chocolate cake!). Toasting the success of our holiday once more with a shot of Brennivin (Black Death) we head out to party the night away in one of Reykjavik’s seediest (but cheapest) clubs. It’s an experience “not to be missed” as, formerly a gay club it is now part gay, part straight and the kind of place where you really do hang on to your belongings. Incidentally we go there for cheap beer at IKR 360! Leaving there in daylight we have about an hours “sleep” before our four o’clock bus to Keflavik airport and our flight home.

Next Year: A South African Safari?