Day Five: Jökulsarlon, an attack of Artic Skuas, and being searched for by Icelandic relatives…

Sunday 29 July 2001 brings with it clearer skies and our second day off. This time it’s an organised trip – a kind of thank you present from the National Park – and are promised icebergs, puffins and artic skuas. After a certain amount of deliberation, and the eventual reorganising of the day to make the best of the weather, we leave the campsite and make our way to the car park. There we see our tour bus for the first time. It’s colour was formerly metalic blue with many rusty highlights, dented bodywork and large areas of unpainted patches. Essentially a minibus, it looks like it’s had the wheel chassy forcibly removed and monster truck wheels replaced in their stead. We board via home-made wooden steps and are soon seated in it’s historical throw-back interior. Sitting in fake leather seats it smells like a 1950’s school bus, and the presense of the hands-free mobile phone, and the large plastic foot hanging from the rear-view mirror (we assume this is some kind of post-ironic air-freshner), do little sway this opinion. Indeed in many ways Dr Teeth and the Electric Mayhem would be very well suited touring from gig to gig in this vehicle. 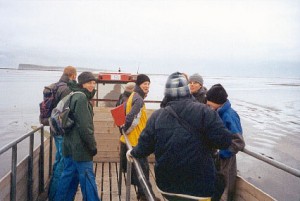 We are driven further round the coast road of Iceland, past the tiny village with it’s hot pool (see Chapter Four), and on, passing more glaciers, more mountains, sheep, and cattle … and Icelandic ponies. Turning off road suddenly, the road quickly deteriates into a something slightly worse than an unmade road, and then nothing more than a track through … well, how do you describe a stretch of land which isn’t a beach, yet which is submerged daily by the tide, that is a field for grazing sheep, whilst being cut by channels of water … anyway that’s what the “road” was like. When bus could take us no further we disembark and board a trailer (which once carried sheep) hitched to the back of a tractor. This time our “road”takes us through a flat calm of water and out onto an endless beach of black sand towards Ingolfshurdi (??) the island where once the first settler to Iceland, one man by the name of Ingolfs, did land. 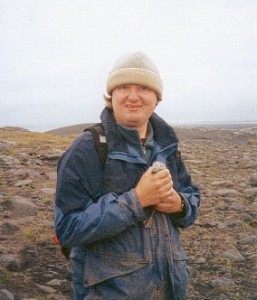 Ariving at our destination, I am quick to scoop a film pot full of black sand, a specimen that to this day can be viewed at the Editorial offices of BVToday.com. Within minutes on climbing up onto the flat, windswept top of this tiny island, our guide, a native Icelander that speaks no English (one of the Skaftafell Rangers has accompanied us to act as translator), with a weather-beaten face and, a grey wind-cut beard and history of puffin farming, instructs us to the birds and the history of the island. We are quickly introduced to an Artic Skua chick, the passes amongst us, before he adds that adult Skuas are vicious birds, protective of their nesting sites and have been known to kill grown men by diving at them and thwacking them with their feet. We move on, hastilly clustering round our guide, the only one among us to have a long stick to wave aloft. “Keep close to the man with the stick,” Ian comments comicly as one of our company receives not one but two blows the head, and our leader narrowly avoids a face full a Skua shit! 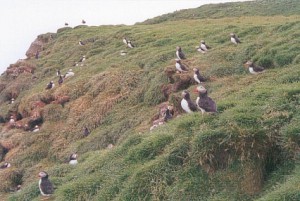 After such excitement we are the more eager to explore the one room turf house – a shelter built for the shelter of travellers, equiped with bunks, rations, emergency radio … and an IKEA dresser. Leaving the safety of indoors, we are then taken round the far end of the island, with the cold Atlantic sea buffetting the steap cliffs to where the Puffins are. Smaller than I expected, the sit everywhere, and obediently pose for the camera singly or in groups, turning their heads, and putting their best profile forward. You can tell that these fine birds are pro’s when it comes to photography. After the puffins, the Gannits and the Guilemots (being so much further away of cliff ledges) are somewhat of an anti-climax, but this more than made up for by an exhilerating, if nervous walk home, a route that takes us directly through a Skua nesting ground.

Rejoining the Electric Mayhem bus (with it’s decidedly cultish logo – Circle of Earth Friends – or some such title) we have new driver, the husband of the first. He takes us a short ride away to a sheltered spot he knows where we eat lunch and drink coffee, warming our frozen hands … the Artic winds out on that island were quite intense. Unbeknown to me, it is at this time that relatives of mine – the ESW’s sister and her husband – are driving past on the main road, trying to find me at Jokulsarlon, our next stop. 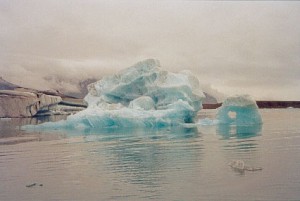 Jokulsarlon means literally glacial lake. We arrive at approximately 3 o’clock in the afternoon, and make an urgent toilet call in the coffee house and shop where just one hour previously my aforementioned relatives sat and drunk chocolate whilst waiting for a characteristic battered buss with a slightly dubious logo emblazoned on it’s side. Finally deciding that they must have missed us, and that we had already been gone, they depart (probably passing us on the road?! we shall never know) and just one hour later I arrive. We are taken out in a boat that for the duration of the trip, just stooges about on the water, moving in betwen icebergs, broken away from the foot of the glacier. A look through the window into the “driver’s” cabin at the GPS unit reveals the bottom of this lake dropping rapidly, second on second by ten, twenty, fifty metres to some 400 metres in depth. Our guide fishes out a lump of 1000 year old ice from the water, crystal clear and pure like diamonds. After telling us that this ice is served up in Iceland Air Business Class, she breaks off lumps of it to hand out amongst us. I take my piece, and eat it all … our leader keeps his, taking it home and after some melting later puts the last remains of it in a glass of duty free Brandy.