And so to Thursday, donning those grubby clothes, pulling vaguely damp socks onto feet and slipping them inside not completely dry boots. We’re working again, and for the next set of three days we move on the next section of path. However first things first, we place our bets for the second time. The question how many tour groups of ten or more people will pass us as we work? After Tuesday’s rollover (I bid an unlikely 10 parties), I place a more modest four. We break down in our groups, and begin work. Pulling out rocks, lopping back birch scrub and widening the path, clambering over precarious slopes in search for a diminishing supply of rocks with the desired three good faces … I’ll explain. 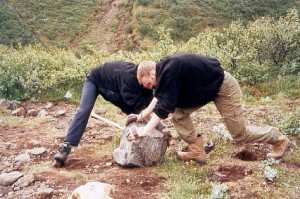 To construct a good waterbar in Iceland, first you need a substantial rock, and by substantial I mean big, really big. It’s all to do with the frost-thaw action – too small and it will just get washed away, or freeze and thaw straight out the ground. You need a big rock that’s not gonna go no where! But a big rock is not enough, you also need your rock to have three ‘good faces’. You need a step, a water-face and a butt (a face that will butt on nicely with the next rock) – a fourth face, a second butt, is also desirable. A brick shaped rock is ideal – as long as it’s not actually a brick. Your rock also has to deep enough to stand roughly two-thirds of it’s total size beneath ground. 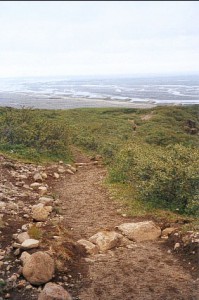 Your average Svartifoss waterbar will consist of three big rocks and a series of ‘liner stones’ in front of the water-face to catch run-off and carry it off the path and into a conveniently dug ditch. We do all this, with only coffee and Mjölkurtex to sustain us?!! On the third day, as the rocks get bigger and bigger, so the rain (which first started as fine misty drizzle) gets bigger and bigger. Saturday, is a washout. Bedraggled we work alone (even the tour groups don’t come) on the steep slopes across the furthest side of the valley. In many ways, it’s the fastest three waterbars we have yet done, working through our Mjölkurtex break and finishing by lunchtime, leaving the site at one o’clock, our leader Mark fearing a revolt.

So what to do on an isolated Icelandic campsite, rain collecting in puddles in the canvass above your head? Go for a swim – a soak in the old Trout pond. It’s not as bad as you think … essentially it’s a hot pool… Unfortunately Skaftafell is not in a geothermal area, so, the constructed the next best thing. With a backdrop of mountains and glaciers, they have taken an ordinary enough old trout farm (a circular concrete pool), cleaned it out, removed the fish, filled it with water and heated it with the incinerated rubbish collected from the campsite.

When you arrive you pay your 250 Kroner (about £1.00) and are confronted by a life-size graphic poster illustrated precisely the areas you should concentrate on cleaning when taking a pre-swim shower. Consequently, you can spend several hours lazing in either the main pool or one of two, four to six seater hot tubs, in the safer knowledge that not only will you not stink of chlorine, but that you will not shrivel up like a prune (by example, half an hour in a pool near Oxford and my skin was the most pallid, washed-out, folded and and crinkled excuse for an prune imaginable). The Old Trout Pond, is sheer bliss just thinking about it.

Oh, and who did win the Tour Group Sweepstake … a late three-thirty bus load took the total to four. I won! 1600 Kroner to spend on a couple of bags of crisps and a bar of chocolate to share out amongst the group!!

Day Five: Jökulsarlon, an attack of Artic Skuas, and being searched for by Icelandic relatives…