Day Seven: The biggest of rocks, partying in the Sheep House, and saying farewell to Svartifoss…

As reported in last week’s installment, our last work task saw us moving the biggest of big rocks. The day was Wednesday, and the weather was fair. As described in Chapter Six the job in hand involved the rebuilding of the path down the last steap section to view Svartifoss itself. This involved moving existing rocks that didn’t fit the bill – too small, wrong size, just looked plain ugly – to make space for the good rocks. Fortunately there were a predominance of good rocks around the place. The geographical history of Svartifoss has resulted in the hexagonal basalt columns, eroded by the foss itself, and the yearly rush of melt water, breaking away and collapsing, splitting into handy sized tessellating ‘steps’. 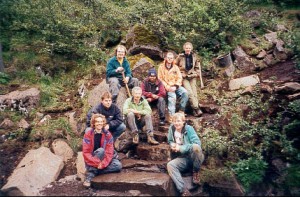 Unfortunately, these handy sized pieces of basalt were in the order of a metre in diametre and half a ton in weight. They were also in the hillside several metres from where we wanted them. Manoevering them into place was a skilled operation involving four or five of us each armed with a rock bar, prizing, rocking, rolling and walking the rock. With some, we were able to flip them out of the ground, sending them crashing down to the bottom of the hill with a loud thud, and some startled tourists. Others, involved carefully lifting and lowering corners until the steps were level. The result, a flight of steps suitable for parading down dressed in a ball gown … but contructed with entirely natural and local materials.

We celebrate our nine days of hard work, and our three rest days, that evening with a party down at the old Sheep House. Chas brings over two fine legs of lamb which we prepare in the simplest of ways by seasoning with salt pepper and herbs, and then dressed with slices of garlic inserted inserted into the skin like a porkupine and wrapped in foil, before it is whisked away in the back of the truck to be thrown into the barbeque and covered over with turf. They are cooked for an hour each, turning once half way, and once eaten is the most succulant and tender lamb can be. Eaten with the accompliment of 200 IKR cans of beer and with three shots of the local Black Death behind us we party on into the night. At about 1am Helen, Ian and myself leave the party to walk back to the campsite, tired and exhausted. Meeting up with Chas on the way back we sit up for a further hour in our mess tent enjoying Swiss Miss hot chocolate and Chas’s volunteer stories (including the nightmare from the previous holiday, the deeds of which I will not go into hear, and which will remain the secret of the Skaftafell Volunteers June/July 2001. 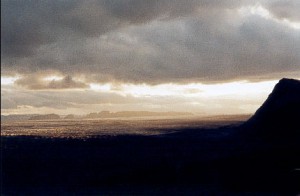 The following day, a rest day, is spent either recovering from the night before (if you had stayed the night) or climbing Kristina Tinder (if you a. had left early and b. were a gazelle). Then there was the rest, those of us who hadn’t left first, but who hadn’t left last. We just stayed around the campsite, bought books in the shop, visited the information centre, help Chas strike camp (well the mess tent, anyway), and pack it for the shipping up to the north for the next holiday. Mostly we just played cards – Black Jack, or Shit Face – although a game of Travel Cluedo was attempted. With no more mess tent, our evening meal was taken in the little cafe on the campsite, and this was followed by a guided tour of the restored farmhouse of Sel (by the Head Warden), another shot of Black Death, the receiving of National Park badges, and a sunset over the glacier. 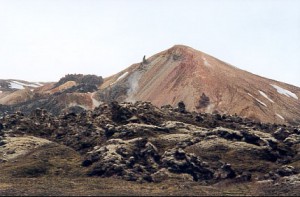 We retire to bed early that evening, with an early start the following morning, we must awake in time to strike camp, breakfast outside the Ranger’s house, and board our 8 o’clock bus to Landmannalaugar. It will be a four hour bus journey into the interior of Iceland, and a spectacular one at that.