Monday 30 June and we are back at work in mixed conditions of hot sunshine, and rain … our group falling into two groups for the two tasks – by chance a ‘boy group’ and a ‘girl group’ with Helen and Vicky taking roles for the day as ‘honorary boys’. The girl group work on the path most travelled by tour groups re-servicing with fine grit air lifted in by the ton (or more) in huge sugar bags (believe they displayed the name of some Norwegian sugar company on the side!). The boy group moved across to the opposite side of the valley on a steaper, narrower path that winds it’s way back round the hillside from Svartifoss to the car park (yes dear visitor, Svartifoss now has an established circular walk, so no turning round at the Fag Stop). 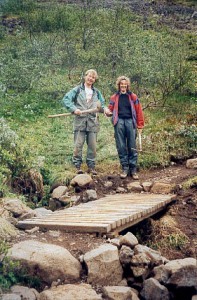 Our work, now that we have chosen to accept it was to finish some water bars we had started on Saturday – something about the gradiant being too steep – and make good some rather lopsided steps. Pause for thought here … these steps are to be constructed out of hexagonal sections of balsalt column somewhere aproaching three quarter to one metre in diametre and height which we manouver around a 1 in 3 slope on a a single file path!! And this with the occassional onset of substantial rain showers. With fluctuating spirits we only realise how lucky we are upon the bedraggled return of Ranger Chas. His tale of hitchhiking in wild and wet conditions back from Landmannalaugar last night, catching a few hours sleep in Vik (the town where it always rains) and then attempting to hitchhike again with sopping kit bag and wardrobe of work clothes, just to bring us supplies of food … we realise how lucky we are.

My own mind is questioning “Who?” upon reports that there has been a native Islander accosting innocent BTCV volunteers on the other side of the valley, asking after a English relative working on these paths, but knowing nothing more than my name is Shepherd. I cannot fathom who it could be, as my cousins, my aunt and my uncle all know my first name. Who could this person be? And it’s a first for Chas, as he himself reports incredulously, “No one has ever come looking for one of my volunteers on the worksite!” This day will certainly go down in the history books, it’s story retold in years to come to the next generation of volunteers. Later, I phone my cousin’s and I hear the full story, that this man was my uncle’s brother acting as tour guide for a coach load of Italians. And I hear about yesterday’s quest to find me led by my aunt and uncle (see Chapter Five). As I report later, “Quite extraordinary, really!” 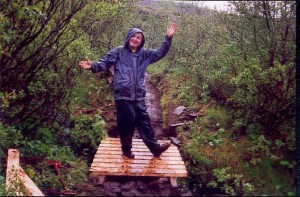 The next day we are working down by the river, some of us on steps (see Chapter Seven), and some of us working to establish a new community of ancient creatures at Trollfoss! Trollfoss was a sadly negletted community consisting of Upper Trollfoss and Lower Trollfoss. When we came to it, Upper T was run-down and unkempt, though it’s resident troll was friendly enough once we had explained what we proposed to do. What we proposed (and subsequently did) do was re-align a bridge, bringing the east bank down and the west bank up to level the river crossing (pictured). 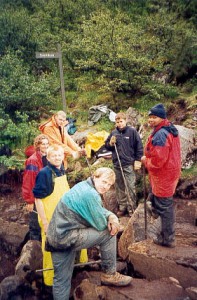 Lower T, by contrast was a deserted subhurb, which hope will now become des-res accommodation for the more deserning troll. Here the old bridge was lifted and broken up by ace demolition experts. New driftwood timber – washed up on the shores of Iceland from Siberian logging mills – was brought up from the Sheep House, and used to construct the replacement bridge on site. Job done, and trolls re-housed, we ventured back down to Svartifoss to rejoin the rest of our group, shifting the biggest of big rocks (see Chapter Seven). This would be a last task on the Svartifoss trail, and the climax to our stay in the south-east of Iceland … it would turn a treacherous last few steps into a grand stairwell to one of the top visitor attractions in the castle. It would be a fitting way to see in that night’s party down at the Sheep House.

Day Seven: The biggest of rocks, partying in the Sheep House, and saying farewell to Svartifoss…