One by one, like wild animals out of the bush, a strange breed of creature, the lesser-spotted ‘VO’ appears in our midst. Sitting in our mess tent, drinking our tea, eating our Mjölkurtex, and joining us for supper. VO, a Volunteer Officer, usually but not always a student, gaining ever valuable work experience in the hopes of one day landing a sought after Warden or Ranger job out in the wilds of the world … for now they just eat our food. Ally is the first of these Volunteer Officer’s – we met her at Snorres in Reyjavik where she was getting a weekend of respite after weeks in the wilds and a couple of storms. Next, came Helen … she stumbled into the camp a couple of days later after a hiking trip with Sarah (a VO we only know by reputation) … a little more native than Ally she is heartened by the arrival of the long awaited tent that we last saw disapear into the bowels of Heathrow and has since been on a return flight to Bahrain.

The third VO to enter into our happy company is Dan … Dan The Man as he is known, is a talkative fellow in his second year of his degree at the infamous Bangor University, himself three-quarter Welsh on his mother’s side, or some such thing… And boy can Dan talk?! Yack, yack, yack … Natter, natter, natter, but he is nice enough … a good laugh you might say. And so the stories of VO Sarah continue to unfold. She is possibly the wildest of the four, certainly the most native, an assiduous worker (particularly the gravelling, Chas tells us), and has become the unelected leader of the VO’s. Still, we are yet to meet her…

Sarah amerges, straggled hair, unwashed and wild her adventurous twelve hour climb, five minutes before we are about to serve up the night’s meal – Chille Con Carne for 16 people and four vegetarians. In a blatant example of segregation and with our thoughts on simplicity, the vegetarians are placed at one end of the table and the rest are told to sit down there. With the skills of a well-oiled production line the night’s food is despatched onto plates and out onto the tables. It’s only some minutes later that we realise we have dished out one to many of both varieties of dish…?!! 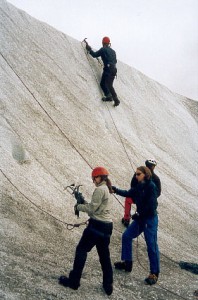 And so to Wednesday. After three long days of work, and an already unprecidented amount of work, we arrive on our day off. At the Great Chille Feast the night before, Frejon, one of the local guides had (with little trouble) sold ourselves on the idea of Ice Climbing. By 9 o’clock in the morning we are gathered round his tent, have received the talk about how BTCV insurance doesn’t cover us for what we are about to for the tenth time, and we are being measured for crampons, issued with with ice picks and safety harnesses before piling into the back of a funny little blue, white and red Volvo van, an ex-Norwegian army vehicle. 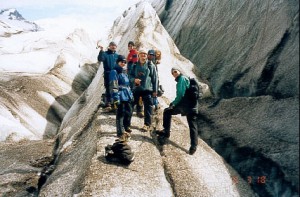 For a discounted price of IKR 3,500 (around £25) we are given the necessary instruction, the history, geography and geology of the glacier, informed that where glaciers are concerned, rolling stones do indeed gather moss, and are soon let lose on a not inconsequential wall of ice. It is harder work than it looks (when watching your friends from below), and not once did I find myself spead-eagled against a vertical sheet of ice, each hand on an ice-pick and toes clinging by their crampons to the ice … but I redeem myself and in time reach the top, looking briefly at the view beyond before abseiling back down.