Sunday. Departing a cold, grey Oxfordshire via the extravagance of a taxi from door to Heathrow. Check-In is straightforward, and departure is on time, although I do have to run the gauntlet of a second security check after inadequate signage to Gate 21 leads me down a corridor down which I cannot return.

No more than a little over an hour later, we are flying over the cloudless Hungary, and I have drawn away from my book to gaze out the window at the flat, agricultural landscape, a patchwork of fields interrupted by little villages and straight roads. We follow the broad, silvery line of the Danube, a little to the west of Lake Balaton (the nearest thing Hungarians have to a coastline). Then across Budapest with it’s tall buildings and regimented streets, lined up in parallel and joined by right angles. Overshooting the city, we fly out again, over a huge cemetery, with it’s graves also in regimented lines but this time spreading outwards into a huge woodland, and other smaller outcrops of graves in other clearings. 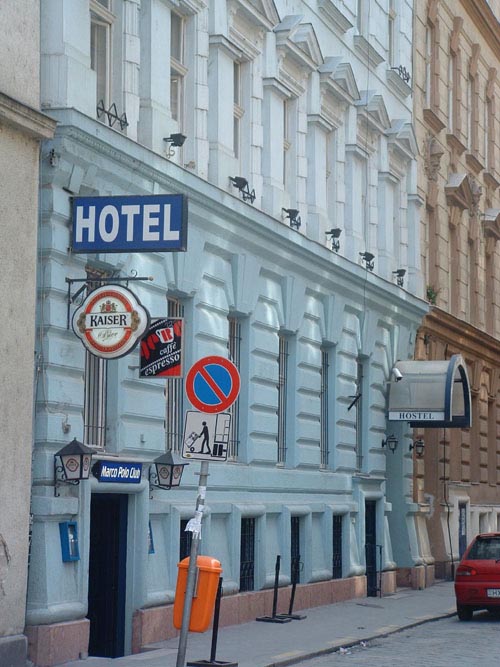 Landing at Budapest Ferihegy Airport, I find its runway surrounded by trees, and beyond, a clean, new airport. A little later, standing at baggage reclaim, clutching my passport with its second stamp inside, I get a sinking feeling…

I sing the words quietly to myself, and eventually, my green rucksack with the strapped on bag does my bidding, and round the carousel it comes ready for me to reclaim it.

The airport minibus couldn’t be easier to arrange, and after a quarter of an hour waiting for my call, it is not more than a forty-five minute ride in an (admittedly not air conditioned) minibus, past frightening signs for the nearest Tesco hypermarket, and with a soundtrack of Britney Spears on the local radio station, before I am stood outside the Marco Polo Hostel. 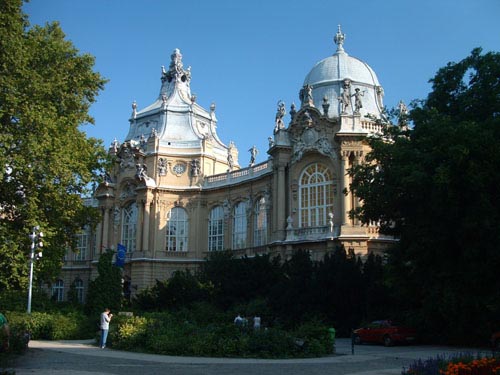 Dorika, on reception, welcomes me to the hostel and deals with my check-in. My room is 106/1 – that is to say that my bed is #1 in room 106 and the second, smaller key on ring is for the locker/wardrobe. Since I have paid the single room supplement I can’t be mithering with things like these, and when I settle in to my new home for the next three nights. It’s a comfortable room, at the front of the hostel, overlooking the street, with big tall double windows that open inward. At the far end there’s an ensuite with a shower, which, hot and sweaty after my journey I make use of straight away, before pulling out my shorts and a fresh T-shirt from my bag, along with my sandles.

Repacking a with a smaller rucksack with guidebook, phrasebook, money, camera, notebook and pen, I revisit reception to collect my 3-day Budapest card at reception before heading out to see what delights the town has to offer. Following Dorika’s advice I head first to the city parks, first by tram, then metro. I find the main “lake” closed for refurbishment, but amongst the cool of the trees a castle built of fine architecture, and now a museum of some sort. Taking the parks in a circular walk, I find myself on the far, northern side, and outside of a three-copper-domed, finely architectural building that I suppose to be a natural history museum, or maybe a church. It’s neither. 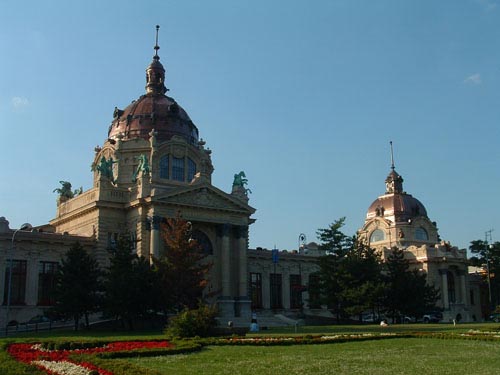 I find myself standing before Széchenyl fürdö – one of Budapest’s famous thermal baths. Upon entering I find myself in a refreshing (and welcome) coolness from the ‘Big Hot’ outside, under a huge church-like dome detailed in gold leaf. It’s hard to see exactly what the system is here, but there are many doors and corridors down which stern looking matrons in long white coats walk. There are also four (maybe more) kiosks around the room, each with it’s own queue and it seems it’s own purpose. No one appears to speak any English but it looks like a fun experience none the less, and I vow to come back here – maybe once I have met either Judy or Steven tomorrow evening… 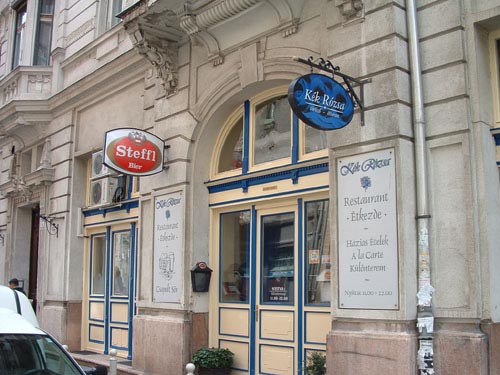 By now I’m hot, and I head back to my hostel to shower and rest up for an hour or so before venturing out to find a meal. This turns out to be at the Kék Rózsa (Blue Rose) – a restaurant recommended to me by the staff at my hostel and to found by turning left out of the front door, left again, down the end of the road, and it’s on your left (just opposite the offices of Price Waterhouse Coopers?!!). An establishment that serves traditional Hungarian cuisine, I am at first presented with a menu entirely in Hungarian. I make a pretty good stab at deciphering the broad headings and some of the items before my waitress realises her mistake and brings me the English translation.

I decide on the Grilled Zander – Hungarian style, and during my meal work my way through guidebook and map, planning what I want to see, and when to see it – marking out possibilities for myself tomorrow, and for Tuesday when I am likely to be in the company of two of my holiday compatriots. 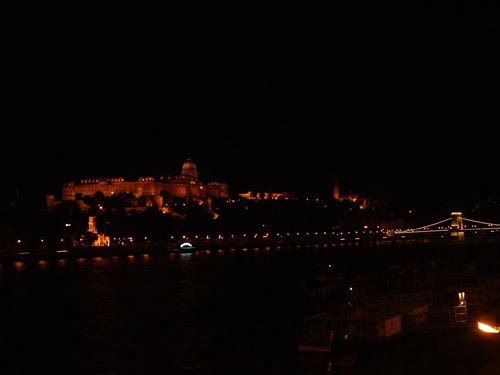 After the meal I stroll out through Pest at night, and make my way down to the river. Buda is lit up across the river together with the many bridges. I wander back in the direction of home, through the centre of Pest, and I am shocked to discover that the cool balloon-wind-sock thing on a street corner, is not just an intriguing piece of street furniture, but is actually (when I approach it from the other side) a “Big Man” and belongs to a lap dancing club. I move on at haste, only to be accosted by a lecherous man with a French accent trying to interest passers by in ‘the best night club in town’ which judging by the scantily clad woman on the flyer I politely refuse is more likely to be the dodgiest night club in town … and all of this on a street between the booking office for Aeroflot and the Budapest branch of Marks & Spencers!

At a 11 o’clock, shortly before I retire to bed and with the temperature still in the high 20s, I enjoy an apricot ice cream from a stall on the street…

Day Two: Taking a sight-seeing tour with Alistair Cooke (retired not late), and trying to buy a map of a village not to be found on any maps…