Tuesday. I wake to the sounds of: a) a dustcard collecting it’s rounds, b) roadworks, or c) the house next door being demolished. I think it is just A although the house on the corner opposite is a demolished ruin, so maybe… 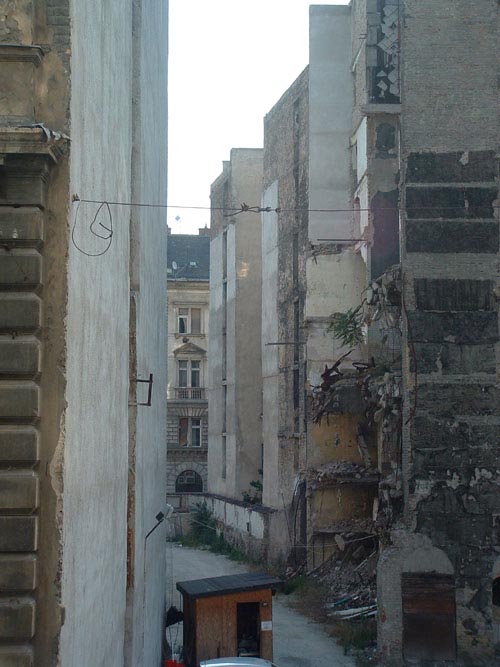 I pull myself from late dreaming, shower, and head down to breakfast. Steven and Judy are already waiting for me in reception with their breakfast tokens. I introduce them both into the ‘system’ of breakfast, the dropping of the voucher into the mixing basin on the side, the cereal, the bread and the cheese and the cold meats. We find a cubicle to ourselves and settle down to breakfast and to make our final plans for the day.

Time comes at last for us to metro down to Buda and under the Danube, take the tram back up the river to the chain bridge, and the funicular railway up Castle Hill. That, at least, was the plan… 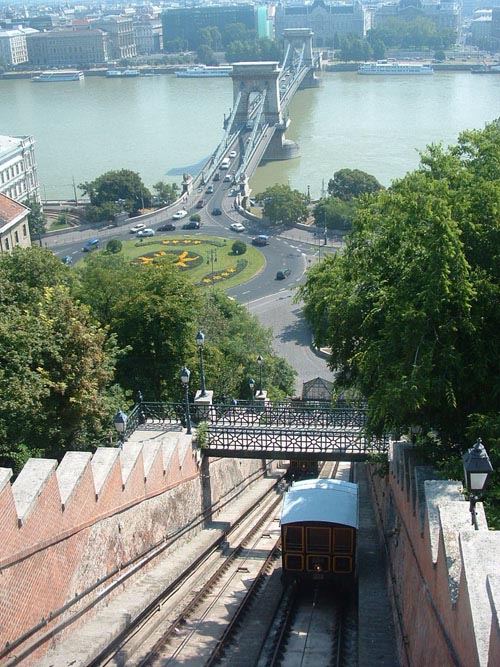 The M2 metro is closed from Nepstadion to Deák F. tér, and the ticket office is missing. Piecing together far from clear signs, we jump on the tram along to Oktogon, and switch to the M1 down to the Basilika, where we can rejoin the M2 to get under the Danube. Back on track, we take another tram to get down to the chain bridge, and pass the sharp tram bends before arriving at the funicular railway.

The cut off for numbers appears to be with me, and so, whilst Judy and I make for the standing room only of the third timber-constructed stepped carriage, Steven is left to wait for the next train. 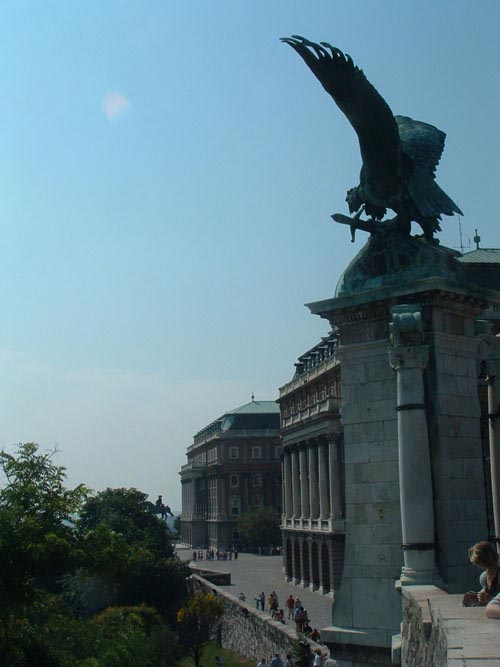 Our arrival station, situated outside of the gates to the city palace, with a fine view across the length of the chain bridge, and of Pest, spread out on the other side of the Danube. A roar of engines, and a tiny biplane arrives out of nowhere, dive-bombing boats and flying low and upside down across the bridge. The pilot is a madman, but a skilled madman, circling the bronze statue of the ‘freedom bird’ that towers over us to our right. We descend down into the courtyard between the front of the palace and the precipitous city wall, discovering that the palace is a museum of modern art and a modern building behind the historic façade. 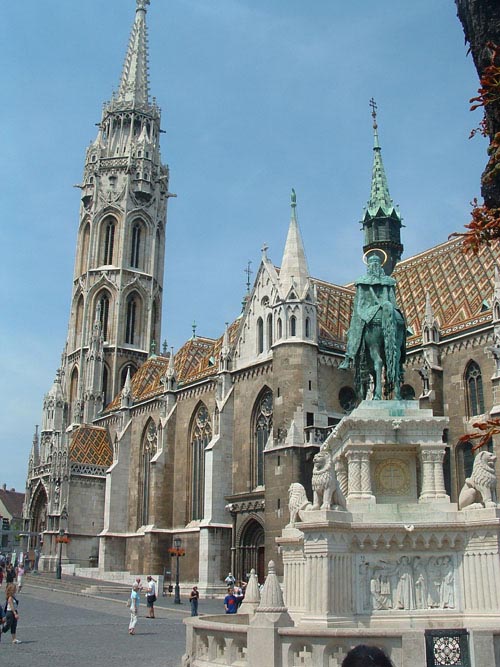 Notching the art museum down as a possible activity later, we start out on a tour around Buda. Starting off in the mosque-like interior of the protestant – former catholic – church of Matthias, we bathe in the coolness within. Then cross the square to the café on the Fisherman’s Bastion, and enjoy iced tea beside one of the finest view of the city. I do recount the ‘Alistair Cooke’ routine of yesterday, telling Judy and Steven about the juxtaposition of the church, bastion and hotel, and then we head out into the old town. Taking each of the four streets that run parallel with one another we swap sides to stay in the shade, until at last we arrive at the tree-lined, single-sided street at the far side of castle hill.

Judy and I at least could not dive down into the labyrinths due to wearing sandals, so instead we sought shade and the cool by returning to the art museum, and a gallery of Hungarian art.

An hour or so later, and we begin to flag – exhausted by so much scenes of Hungarian rural and city life. As we meander back up the old town, Judy decides to head back to the hostel for a a shower and a rest. Steve and I find a restaurant with a terrace and I have myself a ‘Sici’ style salad, water, and a local beer.

Finish up writing my postcards during lunch. Wandering across the square to post them outside Buda’s main post office, I then disappear into a small market behind high walls. Whilst tempted by some very nice pottery, I am informed by the stall owner, that the heat we are currently experiencing are not typical. 26–30 degrees would be more usual than the current 35 or 36 degrees.

There is also a stall selling leather goods, including some rather nice wallets. I need one anyway, and whilst perusing the stall I am approached by the son of the stall’s owner, enthusiastic in hushed tones he looks at the price of each wallet that I show interest in and keys in a new price to the calculator, all the time reassuring me that it is real leather – not plastic – and calling me sir. I do feel a little obliged to buy one, but they good wallets, and I do need one. 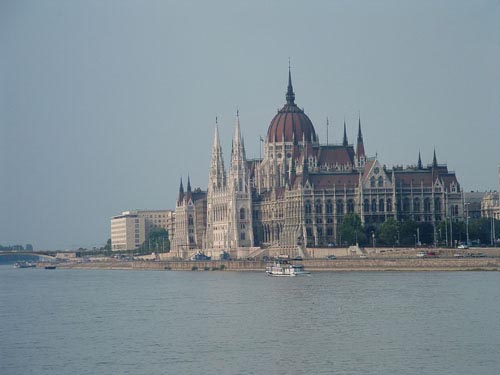 Rejoining Steven we walk back down castle hill, not finding the King’s steps to my disappointment – and find the tram stop again, riding it back along the side of the Danube to get the metro back to St Stephen’s Basilika.

Five thirty. We climb the 150 steps of the basilikas dome to the 360 degree panorama of the city. Crossing the roof space, there are fleeting memories of the ascent into Vjalla chuch roof of last year in Estonia. Riding the lift back to the ground floor, it’s the metro again back up to the Oktogon and the tram back to the hostel.

I shower, and rest a while, finding a table in the courtyard at the rear of the Marco Polo, I transfer the contents of my old wallet into the new. And then after Judy and Steven join me we wait on for Zoë.

Waiting for Zoë… From a bit before eight we scrutinise every entrant to the courtyard – single girls in particular: Zoë? Not Zoë? We take it in turns to go out – check reception – and the street outside. At quarter past eight, we decamp to the street. Again possibilities, and no … eight-thirty and my mobile rings. It’s Zoë. It turns out that she was downstairs in the Marco Polo cellar, not upstairs in the hostel. She’s now back at her hotel where she left my mobile number. We make arrangements to meet outside the T-mobile shop (which is next door, I’m told, a Pretty Women store) at Astoria.

As we hot foot it down the road it occurs to me that Zoë probably still doesn’t know how many of there are. Hey, Thomas is three. And ten minutes later, we are again looking out for Zoë-like people. Then a tram arrives, and Zoë tells us later, how with disbelief as she looks across to see so many people at the rendezvous place. She is guilty and apologetic at missing the previous meeting point, but such thoughts are silly and we quickly put her at ease. 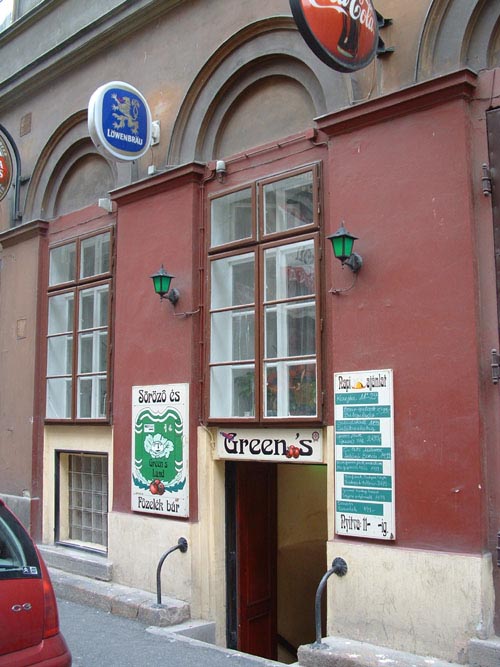 Hungry at 9 o’clock, we head off to Greens, a cellar restaurant that Zoë has found recommended in the Rough Guide, where she and Steven sample a Hungarian goulash, Judy goes for chicken dish and I go for a waiter-recommended Hungarian beef. We chat and exchange Budapest stories and muse about the holiday ahead. There is some confusion on the number of volunteers – we all have different names and numbers on the volunteer lists – however we do more or less unanimously agree that there is a Louise on the holiday from a non-England location. No one believes me that there is a Martin on the holiday though. Only time, it seems, will tell…

Day Four: An agricultural past, thermal baths in the present, and an arrival in Gömörszőlős in ever-increasing numbers…